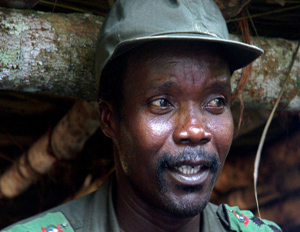 For the past few days social media feeds have been erupting with “Stop Konyâ€ messages, videos, and photos. The 30-minute YouTube film on the Ugandan warlord Joseph Kony uploaded Â Monday went viral and has more than 56 million views (at press time).

In October, President Obama sent 100 troops to Uganda to help regional forces battle the LRA and capture or kill Kony.

On April 20, the group is asking supporters to cover their hometowns with posters calling for the militia leader to be brought to justice, reports ABC News. Supporters can sign a petition and contribute to the cause by buying T-shirts, posters and bracelets on its website.