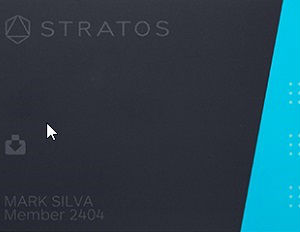 If your wallet is getting too crowded, two startups may have the solution for lightening your load.

Stratos and Coin so far appear to be the leaders in the “smart cardâ€ market. A smart card is a device that manages 10 (Stratos) or eight (Coin) credit, debit, gift and loyalty card accounts. That transforms the cards into all-in-ones and allows users to ditch carrying around so much plastic, according to USA Today.

Each card can be managed from an app installed on your smartphone. In fact, if you happen to lose your Stratos or Coin card, you can go to the app to deactivate it immediately, preventing thieves access to all of your goods.

Stratos is available now to the general public and charges $95 a year for the convenience. Coin–which is now shipping its cards to crowd-funders after a delay from a 2014 launch–charges a one-time $100 fee, USA Today reports.

According to the report, the Stratos card must be tapped in order to turn it on. Cards are grouped into blocks–the order of which can be shifted on the app–and, once activated, LED lights on its side light up to let users know which account is about to be swiped.

A reviewer for WIRED said the card was “a little awkward,â€ noting that while it was an “amazing ad for itself, because you can’t use it without talking to somebody about how it works or why it exists,â€ it also “took three or four or nine tries to get the card to read. It doesn’t feel like living in the future when you’re swearing at the Walgreen’s register while the line builds behind you.â€

USA Today also notes that the cards are coming at a particularly bad time, as banks make the change to seemingly more secure, chip-based EMV credit cards, and retailers prepared to accept those by October. Stratos and Coin are not currently compatible with EMV, though Stratos says next year’s cards (the service issue new plastic each year) will be and will also include fingerprint authentication.