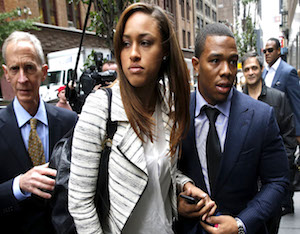 Former Baltimore Ravens NFL running back Ray Rice (R) and his wife Janay arrive for a hearing at a New York City office building November 5, 2014. Rice is making his case on Wednesday to return to the field after the National Football League indefinitely suspended him from the game for claims of domestic violence. Rice, 27, claims that he was punished twice for the same offense, a one-punch knockout of his then-fiancee Janay Palmer during a February altercation at an Atlantic City, New Jersey, casino. REUTERS/Mike Segar (UNITED STATES – Tags: SPORT CRIME LAW FOOTBALL)