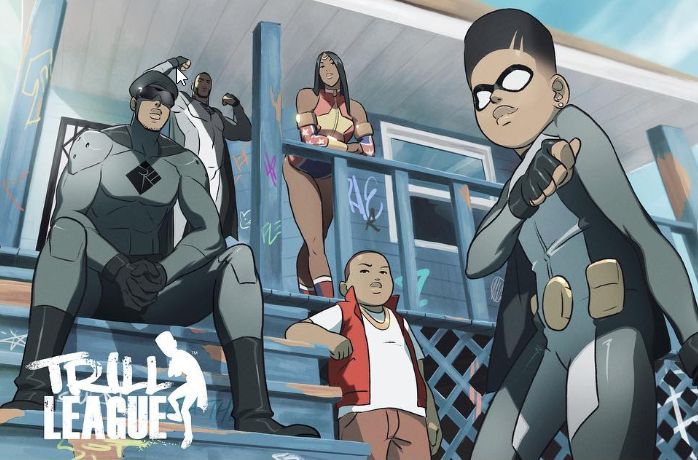 In an era of social injustice and internet trolls, a league of black superheroes, ‘Trill League’ is tasked with saving the world from monsters, super villains, and haters of all kinds. Get ready for this remixed rendition of your favorite superheroes as the series satirizes modern American society.

Trill League, an animated series based on Anthony Piper’s graphic novel, is a combination of superheroes, anime, and hip-hop culture. Piper is co-creating, writing, and executively producing the series with Jameel Saleem (Disenchantment, Whiskey Cavalier). The executive producers are 50 Cent and Jermaine Johnson of 3 Arts Entertainment, which is producing the series with 50’s G-Unit Film & Television in association with Lionsgate TV.

“I am excited to bring G-Unit Film & Television to an innovative platform like Quibi with my partners at Lionsgate and 3 Arts. Anthony Piper and Jameel Saleem have created a world we haven’t seen before in Trill League, looking forward to sharing it soon,” said Jackson in a statement to Variety.

Quibi, which launches April 6, 2020, is a short-form mobile video platform founded in 2018 by Jeffrey Katzenberg and will carry Trill League on its platform.

“It’s been a long journey man. I don’t even really need to say much. My people who been rocking with me since I created this thing know I ain’t never let up. Those the ones I care about — just wanted to show y’all I was committed to reciprocating the love y’all shown me, and that I’m appreciative to everyone who’s helped me on this journey. We gonna put in that work and try to pry these doors open for black artists who put in that work with these pencils and Cintiq pens. And yea…we gonna be reckless with the comedy too! Me and my co-writer Jameel Saleem @germantownjam got some heat. And you know the ill shit me and Chase @saintchase build when we collab. Much thanks to my manager Jermaine for making this happen, alongside @50cent and Anil heading up G-Unit Films, Lionsgate, 3Arts Entertainment, and my man CJ, Colin, Doug and the Quibi team for bringing this series to life! #trillleague #animation #hiphop #blackartists“