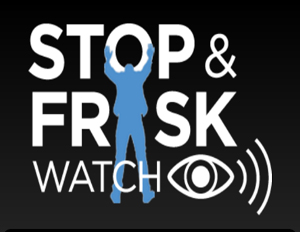 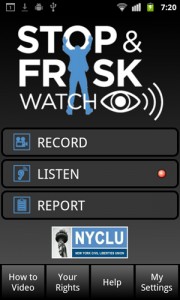 These days there really is an app for everything. However, how many smartphone applications do you know can reinforce one’s human rights? The New York Civil Liberties Union wants to remind New Yorkers of their natural rights, and, if there’s any concern, give them the ability to equip themselves, or others, with their mobile device.

Designed by Brooklyn-based computer developer and visual artist Jason Van Anden, the Stop and Frisk Watch app allows users to record video and send it to the NYCLU servers, which it does immediately after the recording stops. The video function can be started and stopped by shaking your phone, and has a setting that will lock the device once the video has ended. The civil liberties organization’s app asks the user to provide supporting information such as whether or not the police officers involved used force and their badge number. The “Know Your Rights” section briefs people about their rights if/when confronted by a police officer, as well as their right to film police activity in public. The free application is available in English and Spanish; an iPhone version is set to launch this summer.

The New York City Police Department criticized the app, outlining it could be misused by criminals and that it raises privacy concerns. While NYCLU recognizes the tool, like anything, can be abused when in the wrong hands, it is designed to help bystanders, not harm them.

“Stop and Frisk Watch is about empowering individuals and community groups to confront abusive, discriminatory policing,â€ said Donna Lieberman, NYCLU executive director, in a statement. The NYPD’s own data shows that the overwhelming majority of people subjected to stop-and-frisk are black or Latino, and innocent of any wrongdoing. At a time when the [Mayor Mike] Bloomberg administration vigorously defends the status quo, our app will allow people to go beyond the data to document how each unjustified stop further corrodes trust between communities and law enforcement.â€

In 2011, the NYPD stopped and questioned people 600% more than when Mayor Bloomberg first took office in 2001, according to an NYCLU analysis. Nine out of 10 of the people were neither arrested nor ticketed, making them innocent. Close to 87% were black or Latino.

To download the Stop and Frisk Watch app, visit nyclu.org/app or Google Play.

Watch the video to learn more about the application: