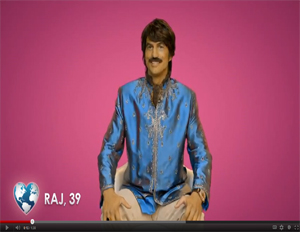 The $1.5 million campaign featured Popchips’ “president of pop cultureâ€ as four different kinds of guys seeking love: Nigel, the Brit; Swordfish, a tattooed biker; a fashionable character toting a pup, and “Raj.” Popchips is not mentioned at any point in 1:38 minute commercial.

Indian-Americans are taking offense to the recent ad, bashing both Kutcher and Popchips.

Co-founder of Activate Anil Dash took to his blog to comment on the commercial, calling it “a hackneyed, unfunny advertisement featuring Kutcher in brownface talking about his romantic options, with theÂ entire punchlineÂ being that he’s doing it in a fake-Indian outfit and voice. That’s it, there’s seriously no other gag.â€

Keith Belling, founder and CEO of Popchips, posted a message on the company’s website addressing the ad:

We received a lot feedback about the dating campaign parody we launched today and appreciate everyone who took the time to share their point of view. Our team worked hard to create a light-hearted parody featuring a variety of characters that was meant to provide a few laughs. We did not intend to offend anyone. I take full responsibility and apologize to anyone we offended.

Do you think Ashton Kutcher’s Popchips ad is offensive? Let us know what you think in the comment section.