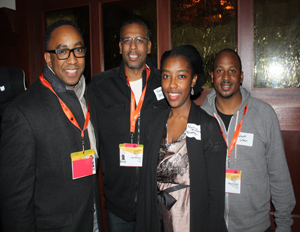 At only 30 years of age, Cofield, who has a degree in management information systems, has a wealth of experience working in minority business development focusing specifically on sustaining economic growth for black entrepreneurs in Austin. She helped the UNCF build out a multimillion dollar microfinance program in conjunction with the Kipp Schools Partnership for College Completion in Chicago. The young leader helped author the 2011 State of Black America report for the Urban League and testified with Bob Johnson on the U.S. Senate Committee on Small Business and Entrepreneurship about obstacles minorities face in today’s capital market.Â She hopes SXSW will shed a light on how African Americans can share in this creation economy.

“SXSW was seen as a white thing, but gradually I am seeing more and more African American participation,â€ said Deone R. Wilhite, senior advisor for the Austin National Black MBA Association’s chapter.Â  “Being a native Austinite, it is good to see black folks come in from all over the country and attend these events.â€

SXSW isn’t the city’s only anchor to technology. Companies big and small are clamoring to stake a tent within its metropolitan area. AT&T, Facebook, and Intel, among other tech companies all have offices in the area. Many are describing this central Texas city as recession proof because of its tech influence and have even dubbed it ‘Silicon Hills’.

“Austin is the place to be. The environment is ripe,â€ said Dusty McCormick, economic and business development liaison for the city of Austin. “About 60 people per day move to Austin to live. Many come without jobs…because of the tech sector, but also because this is an entrepreneurial environment in general. The city of Austin is launching new lending programs for small businesses, and we are also looking at federal funding to be able to locally fund small startups.â€

Even with such a great springboard of success, the CCAACC and others have a big job on their hands if they want to build a black tech mecca in Austin.

Even McCormick admits it is going to be an uphill battle for blacks in tech.Â “There are not a lot of young, African-American entrepreneurs presenting their product or service at the IC squared, a University of Texas at Austin think tank that supports entrepreneurship and product commercialization.

“It is where tech startups go to pitch to venture capitalists. Many times we [blacks] aren’t there. It is unfortunate.â€ But like Cofield, blacks right here in Austin are trying to make their presence known. In his remarks at last nights event, Nnamdi Orakwue talked about moving his family from New York to Austin to work as Michael Dell‘s executive assistant and the warm welcome he received upon arriving in town.

The chamber will host several panels throughout SXSW including a panel called “Social Media for Minority Mindshare“ on Saturday afternoon.