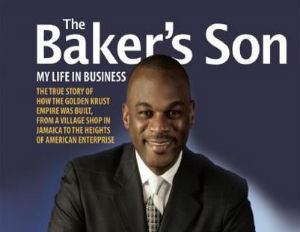 Among the nation’s largest black-owned businesses, Golden Krust holds the No. 31 spot on BE 100’s Industrial/Service Companies list, with $113 million in revenues for 2014. The chain of quick-service restaurants employs more than 300 people across the nation.

Hawthorne’s business journey is a remarkable one; from growing up in the rural parish of Saint Andrew on the island of Jamaica, to becoming the owner of the largest Caribbean restaurant franchise chain in the country.

Founded in 1989 by Hawthorne, his 10 siblings, and extended family, Golden Krust is inspired by the recipes passed down from family patriarch and master baker, Ephraim Hawthorne, who was known for his homemade baked goods featuring the finest ingredients, Caribbean spices, and signature flaky crust.

Today, Golden Krust is serving up traditional Jamaican cuisine at over 120 franchise restaurants in nine statesÂ as well as selling Jamaican patties at a variety of retail stores and supermarkets nationwide.

Golden Krust continues on an aggressive growth path with the company eyeing expansion not only in the U.S. but Europe, the Caribbean, and Canada.

UNDERCOVER BOSS, now in its seventh season, follows high-level executives as they slip anonymously into the rank-and-file of their own organizations.

As with other episodes of the reality TV show, Hawthorne is disguised in order to get a firsthand look at the business models’ strengths and flaws as well as learn of the personal and professional struggles of employees and franchisees. Hawthorne has noted that the eye-opening experience provided meaningful insight into the brand and invaluable appreciation that goes into the day-to-day operation of a Golden Krust Restaurant.

During the episode, Golden Krust will be hosting a live chat on Twitter via @GoldenKrustBkry and will respond in real-time to any conversations using #UndercoverBoss.

Golden Krust encourages fans to host viewing parties by offering a downloadable “party pack,” available on its Facebook page. The Patty Party Pack will include downloadable e-vite, Spotify playlist, as well as Golden Krust trivia to play with partygoers.

What’s more, the company is hosting a Twitter Photo Contest where fans are asked to upload photos of their viewing party and the one with the most likes receives a Golden Krust gift basket filled with golden and delicious Jamaican favorites and a 24-pack of Golden Krust Jamaican beef patties. Contest information is available on the Golden Krust Facebook page.