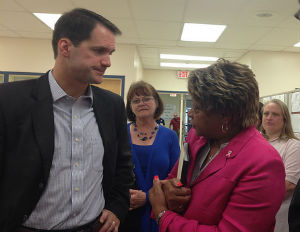 In an exclusive interview with Black Enterprise, Democratic Congressman Jim Himes emphatically expressed how proud he is that Connecticut is the first state to restrict state-funded travel to Indiana and other states that permit discrimination based on sexual orientation or gender.

[Related: BE Exclusive: Snoop Dogg talks Guns, 401ks, and How Blacks Can Raise Their Financial Voice]

“Indiana could use this law to cover discrimination against any group,â€ the Congressman told BE. Read the full interview below.

Connecticut Governor Dan Malloy made international headlines by announcing that Connecticut will be the first State to take a bold stand, against Indiana Governor Mike Pence’s announcement last week that he had signed into law the Religious Freedom Restoration Act. The law allows businesses to refuse service to gay, lesbian, and transgender citizens on religious grounds.

Other opposition included a joint statement from the NBA, WNBA, Indiana Pacers and Indiana Fever issued saying, “The game of basketball is grounded in long established principles of inclusion and mutual respect.Â  We will ensure that all fans, players, and employees feel welcome at all NBA and WNBA events in Indiana and elsewhere,â€Â  Several prominent former NBA players, including Charles Barkley have called for the NCAA to pull out of the final four tournament.

Apple CEO Tim Cook, who came out last year, stated in an op-ed story that “On behalf of Apple, I’m standing up to oppose this new wave of legislation.â€

The cities of Seattle and San Francisco have also banned all city-funded trips to Indiana.

In a phone interview with BE, Congressman Himes said Indiana is in for a lot more heat:

BlackEnterprise.com: Indiana Governor Mike Pence says the Religious Freedom Restoration Act is about religious freedom, not discrimination, what are your thoughts on that?

Rep. Jim Himes: This is a conservative right-wing attempt to provide legal cover to help people discriminate against the LGBT community and it’s just plain wrong.Â  We’ve seen this time and time again.

What are the implications for the LGBT community, and possibly even minority and immigrant communities due to legislation like RFRA?

Fifty years ago we had this fight with racism. People tried to say ‘It’s my business how I treat Black people,’ and believe me, they didn’t use the ‘B’ word.Â  Businesses that would use this law to discriminate should remember they are served by the roads that we all pay for.Â  They use services that we all pay for.Â  Religious freedom does not mean you get to discriminate against anyone.

What does the fact that we are having this discussion and Indiana took this action say to you as to where we are as a nation when it comes to LGBT rights?

This points to the fact that while attitudes towards the LGBT community have changed rapidly, they haven’t changed entirely.Â  The Indiana backlash speaks to the dramatic changes we’ve seen in this country.

How do you feel about Connecticut being the first State to ban state-funded travel to Indiana?

When a legislature does something that’s inconsistent with our values, someone should speak-up.Â  We led the way on marriage equality and have always been a leader on standing up for LBGT rights.

How do you think all of this will play-out?

The Indiana legislature is going to have to come to its senses very quickly.

Indiana Governor Mike Pence may be having a change in sensibilities. He has pledged to change the controversial religious law to clarify that it does not allow discrimination against gays and lesbians.