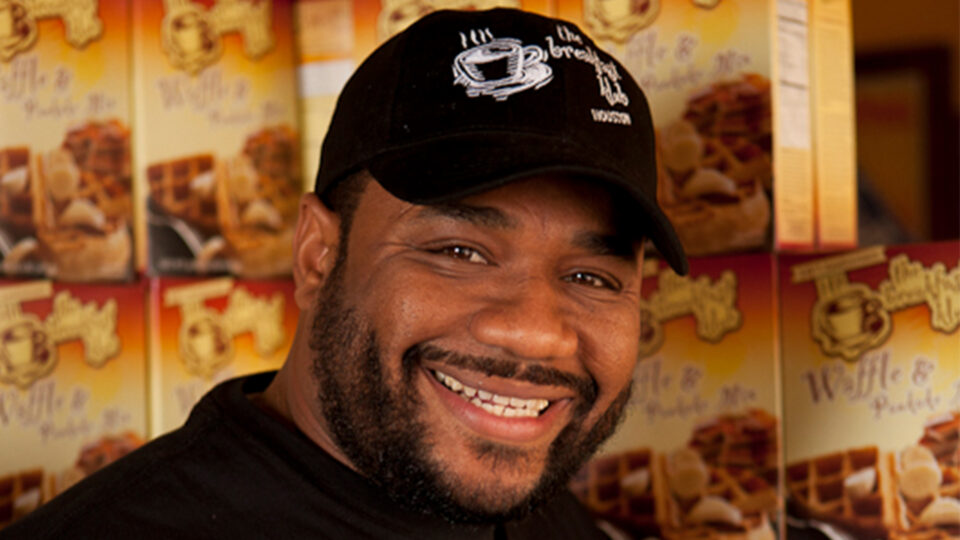 On any given day, when you step through the doors of The Breakfast Klub in Houston, you’re likely to see its owner, Marcus Davis, holding court with a few of its regular patrons or newbies visiting from out of town.

More than anything else, Davis loves people, and he especially enjoys engaging them in a good political debate or telling them stories of the early days when he opened his first restaurant at just 30 years old.

After 20 years in operation, The Breakfast Klub is not just a landmark in Houston’s Midtown neighborhood; it’s a staple of the community and a bucket list item to be crossed off by visitors traveling to the Bayou City. It’s at once an art gallery where Black artists can display their wares; a safe space where community leaders and politicians can have a meeting of the minds; and a refuge for a weary soul in search of a good meal.

It’s not uncommon these days to see chicken and waffles or catfish and grits on a breakfast menu, but back in 2001, when Davis opened The Breakfast Klub, the idea of an independent restauranteur serving all-day breakfast was relatively new. Davis says The Breakfast Klub helped lay the groundwork for similar restaurant concepts in other cities.

“I’ve actually had people thank me for inspiring them to open their own restaurants. Now you can go to places like Atlanta or D.C., and see our influence there,” Davis said.

So what’s the secret sauce to the longevity of The Breakfast Klub? Surprisingly, it has less to do with food and more to do with business.

“Some people think that because they can cook well, they should open a restaurant, but if you don’t know how to actually run a restaurant as a business, you could be setting yourself up for failure. There’s so much more to it than creating food that tastes good,” Davis said.

Davis and his wife Mel also believe in diversifying their offerings. In addition to the restaurant’s menu, The Breakfast Klub also has its own brand of products customers can use at home, including premium coffee, fish fry, chicken coating, seasoning, and pancake and waffle mix.

The COVID-19 pandemic has ravaged the restaurant industry to the point where many are having a tough time staying afloat, and many have had to close their doors altogether. While other eateries scramble to find employees willing to show up to work, the staff members at The Breakfast Klub see their jobs as a badge of honor and pride.

“We don’t tend to have a high turnover rate because people actually like working here. Our staff is like a family, and just like any family, some personalities may conflict from time to time, but at the end of the day, it’s all love,” Davis said.

That family atmosphere isn’t limited to just the employees. Every customer is treated like an old friend, no matter their pedigree. It’s true that many high profile people who come to town make sure to stop at The Breakfast Klub, namely Hip Hop icons Run DMC, and even the Queen B herself, Beyonce.

If you think The Breakfast Klub is just a restaurant serving grits and eggs all day, then you’ve missed the true experience of what it means to be inside a place that has stood strong for two decades amid massive construction, gentrification, one of the most destructive hurricanes in history (Hurricane Harvey) and a global pandemic.

The restaurant industry can be grueling, especially in a city where people literally have tens of thousands of choices of where to eat every day. The fickle tastes of Houstonians can lead to an establishment opening and closing in just a year or two, so it’s not small feat to keep customers coming back for two decades.

“The beautiful thing about having been in business for 20 years is that I love it even more today than I did when we started. It’s like marriage. It’s going through the good times and the bad times and coming out stronger that makes the journey worthwhile,” Davis said.

In true fashion, Davis kicked off The Breakfast Klub’s 20th anniversary with a nod to the community that has made him a celebrity of sorts in his city and that has made The Breakfast Klub a recognizable name throughout the country. His Day of Inspiration Community Festival brought together motivational speakers, musical acts, spoken word performances and visual artists, all to uplift the people of Houston.

“As a city, we’ve gone through a lot the past couple of years, just like a lot of other cities throughout the country, so if there’s something I can do to put a smile on the faces of the people who’ve supported us over the years, I’m happy to do it.”