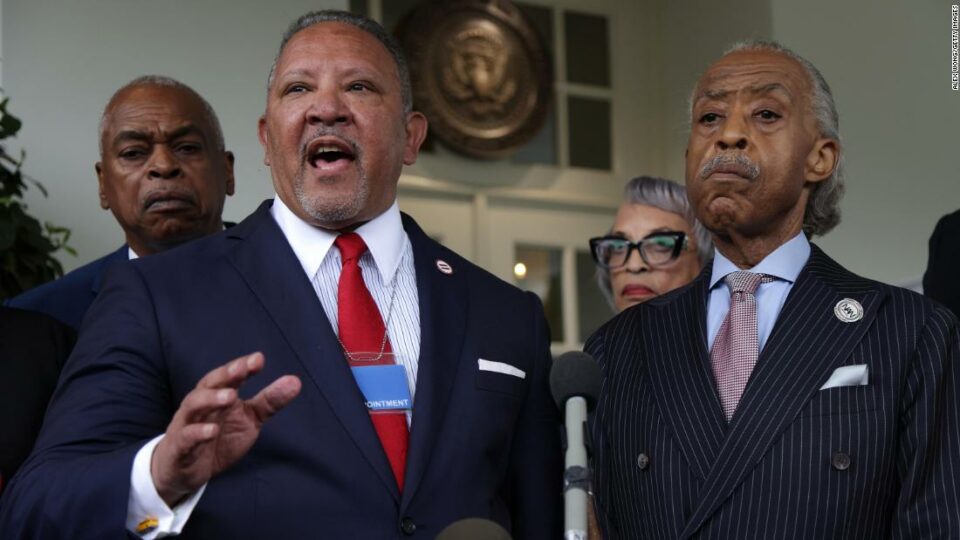 Civil rights leaders Marc Morial, Johnnetta B. Cole and the Rev. Al Sharpton speak at a briefing outside the West Wing of the White House following a meeting with President Joe Biden and Vice President Kamala Harris in July. (Image: Twitter/@vfaglobal)

A coalition of civil rights groups released a report Wednesday grading lawmakers on their voting record and saying U.S. politicians are failing them.

The report was released by the National Urban League, NAACP, National Action Network, and several other civil rights groups. The scores were based on senators’ votes on the American Rescue Plan Act, the John  R. Lewis Voting the Rights Advancement Act, and the For the People Act.

The coalition was critical of the way politicians have used the filibuster, adding, “This once rare procedure has been normalized into a tool to effectively stymie major legislation, including voting rights protection bills.”

Marc Morial, the president and CEO of the National Urban League, told CNN that the civil rights groups are using the scorecard to send a message “that all roads lead to voting” and to show that voter suppression is considered a threat to democracy.

“Voting and democracy is the protector and the empowerer of our voice on every other issue: policing, education, economic equity. Without the right to vote we have no say. No voice. No seat at the table,” Morial told reporters Wednesday. “We’re sending a message to members of the United States Senate that we expect them to do everything in their power to protect democracy. If that means reforming the filibuster then so be it.”

Senators were given a grade of “A,” “F,” or “I,” meaning incomplete, depending on how they voted or their stance on changing the filibuster. Unsurprisingly, all Republicans were given F’s while Democrats and Independents received either an A or an incomplete.

“It is time we put Senators jeopardizing our civil rights on notice. We must be loud and clear, all across the nation, that we will not rest until voting rights for all are restored,” Johnson said in a statement. “This Congress must use any means possible to pass the Freedom to Vote Act and John Lewis Voting Rights Advancement Act.”

Democrats have been pressured by civil rights groups and Black voters, who pushed Biden into the White House, to pass voting rights reform. However, Republicans have enough seats in the chamber to keep Democrats from reaching the 60-vote threshold to overcome a filibuster.

Meanwhile, Republicans have been making their own changes as at least 19 states have passed 33 news laws this year that make it harder to vote, according to the Brennan Center for Justice analysis.