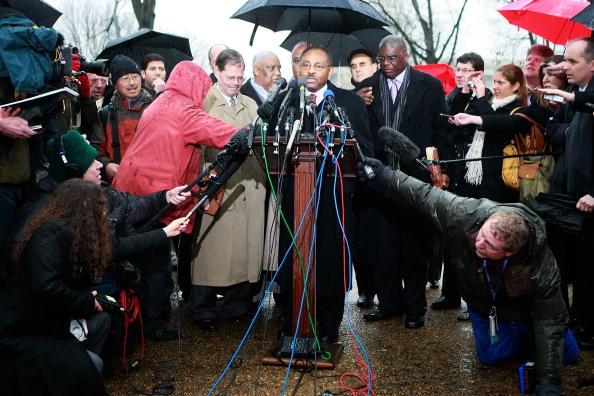 Roland Burris makes a statement after being told he would not be filling President-elect Barack Obama’s Senate seat. (Source: Getty Images)

As returning and newly elected lawmakers in both chambers of Congress were formally sworn into office today, there was much celebration and controversy on Capitol Hill. Democrats now control both the House and the Senate, with bigger majorities than even Bill Clinton, the most recent Democratic president, enjoyed.Â  In less than two weeks, they’ll also take control of the White House.

Many challenges await them, including the worst economy in recent history, but Democrats say they look forward to working with President-elect Barack Obama to implement his ambitious agenda. Their first priority will be a huge stimulus package designed to improve the nation’s infrastructure, create jobs, and get the economy moving again. Obama has already met with leaders from both sides of the aisle to begin finding common ground before January 21. A bill may be complete by early February.

However, the day was without controversy. Most notably, there was a question over when, or even if, Roland Burris, embattled Illinois Gov. Rod Blagojevich’s pick to fill the Senate seat vacated by Obama, would be allowed to take office. Blagojevich is currently being investigated over allegations that he tried to sell the seat to the highest bidder.

Burris, a former Illinois comptroller and attorney general, who has been calling himself the state’s “junior senatorâ€ was turned away this morning when he showed up at the Capitol to stake his claim. The secretary of the Senate rejected his credentials because his appointment letter doesn’t include the signature of Jesse White, Illinois secretary of state. White says the appointment is invalid because of the scandal surrounding the governor. In addition, Illinois Democrats are concerned that Burris, 71, may not have the gravitas and appeal needed to ensure the party will hold the seat when it’s up for re-election in 2010.

Illinois Rep. Danny Davis argues that allowing Burris to take office is the only logical and judicious thing to do. In naming him, Blagojevich “wanted to assert his position to say I am the legal governor, I have the right to make this appointment, and I’m going to do it,â€ says Davis. He adds that while there is support for Burris across the state, politics appear to hold more sway than the will of the people.

Senate majority leader Harry Reid of Nevada has also been drawn into the controversy. Speaking on “Meet the Pressâ€ on Sunday, he suggested that Burris might be seated under certain circumstances, such as if the state’s lieutenant governor appointed him after Blagojevich is impeached or steps down. Until that happens, says NAACP Washington bureau director Hilary Shelton, Reid must defer to whatever happens in the state.

“Reid respects Burris very much and considers him to be an extremely talented politician. He said that because of the unfortunate scandal around the whole process of the replacement, [the appointment] speaks