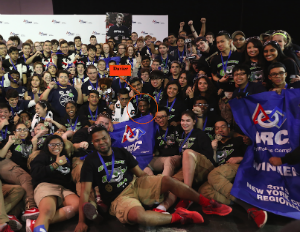 They won in March in New York, but will they win in April in Missouri? That’s the question the winning FIRST Robotics teams are asking themselves as they prepare to compete against not only national teams but against the best and most dedicated teams from around the world.

[Related: 5 Colleges That Are Planning to Lower Tuition in Fall 2015]

Approximately 2,500 students who had built their own robots competed against students from Brazil, China, and Turkey as well as the U.S. in a high-stakes, high-energy three-on-three sports-style tournament at the 15th annual New York City Regional Competition and Expo, held March 13—15.

Now the regional winners are preparing to compete in St. Louis, April 22—25, missing a week of school but learning tons about science and technology, bonding with their teammates, and developing crucial problem-solving skills that may serve them the rest of their lives.

FIRST (For Inspiration and Recognition of Science and Technology) was developed to introduce students to robotics, research, teamwork, inquiry-based problem solving, and much more. An after-school and weekend program, it is demanding as well as rewarding.

Davier Simmons, a junior at Queens Vocational and Technical High School, is a member of the RoboTigers, one of the winning New York teams. To say he likes being on the team may be an understatement.

“FIRST was my window to the engineering world,â€ says Simmons. “As a kid at 14 I had no clue how I was going to start in robotics engineering, I just knew I wanted to do it. Being involved with FIRST really showed me the ropes. The mentors are very energetic and willing to show you anything you’d like. Going to competition is so much fun since you get to meet a bunch of other students from around the city and the world that like the same things you like. All of this while competing a robot that our team worked so hard to build for six weeks.â€

Simmons says he would recommend participating in FIRST to anyone, and that students who are more interested in entrepreneurship “get to manage the team, handling the business side of it.â€

FIRST participants learn aspects of mechanical and electrical engineering, but Simmons says that the problem solving skills he’s learned may be even more important. “You should have the ability to analyze and come up with different solutions. It’s about finding the next best solution and working together with your team to find one. Dean Kamen [the founder of FIRST] encourages gracious professionalism, so participation in FIRST really helps to develop the skills you’ll need out there in the working world.â€

Simmons, who plans to study electrical engineering in college and is studying pre-engineering now, says being in FIRST has opened his eyes to the practicality of his major.

Peter Beninati, a mentor to the RoboTigers and a full-time college student, volunteers 30—40 hours a week with the team and was introduced to FIRST himself as a high schooler. His volunteering has helped to determine his life’s work. “I didn’t know what I wanted to do when I graduated from high school. Then I started volunteering with FIRST and remembered how much I loved it. So I decided to major in career and technical teaching.â€ Beninati says the students learn not only mechanical and electrical engineering but also soft skills, such as how to work on a team and communicate effectively.

Beninati calls FIRST “a best kept secret,â€ but it doesn’t have to be. Church groups, boy scout or girl scout troops, neighborhood groups, or community centers can start their own FIRST teams. The time demand is great–Beninati says students log 3,200 hours between January and March, when they’re preparing for competitions. The RoboTigers meet Saturdays and Sundays and after school, but Beninati says he has to make the kids leave. Asked about the time demands, Simmons, who’s been a member of the RoboTigers team for three years, says, “FIRST requires the time a dedicated person is willing to give. Some students on my team come to school an hour early and then stay until 8 pm. It takes a lot of time but in the end we are doing what we really want to do.â€