Former Miss America Moved From Seat Because Was Black? 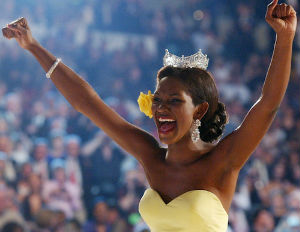 Ericka Dunlap, crowned Miss America 2004, was outraged this past Saturday (November 12) during the 2013 Miss America pageant as she claims one of the show’s producers demanded that she move out of her seat because she’s Black.

The former Miss Florida (2003) told TMZ, “I was sitting there on the aisle, and during the first commercial break during theÂ top 15 announcement, a producer came up to me and said, ‘Get out of that seat. I need the seat. I don’t give a f**k who you are. Get out of the f**king seat’.” According to Dunlap, she refused to move out of her seat because of the way she was spoken to and treated, telling TMZ, “I was spoken to as if I didn’t matter. If I were any other Miss America, I would have never been spoken to like that. But I’m the only black one who comes back.” Eventually, another producer came over and physically helped move the first Black Miss Florida from her seat. Dunlap was, “mortified.â€

Ericka Dunlap is now seeking an apology from the organization and/or the producer for his racist antics. But through all the hoopla, it turns out the producers required the former Miss America to move because sheÂ was in a seat designated for parents of current contestants.

“During the night of the telecast, Ericka was unhappy with her seat, and she chose to move to a camera blocked seat that was reserved for the parents of our contestants,” said a rep for Miss America. “At the top of the show, the stage manager asked her to move to seat the contestant’s parents, and she refused to move. She subsequently was offered a better seat, however she refused it. It was strictly a television production issue.”