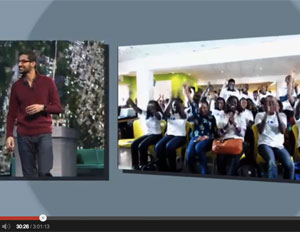 On Wednesday, Google kicked off its I/O developer conference in San Francisco, California, and attracted thousands of Android programmers ready to participate in the software giant’s sessions and coding labs.

Google had a slew of announcements, from cheaper smartphones for developing countries, to Android L, the company’s update to the previous smartphone operating system, KitKat.

But what drew attention that couldn’t be garnered from a new API was an announcement from Sundar Pichai, senior vice president of Android, Chrome and Apps.

After greeting the developers in the audience, he went on to greet developers watching the live stream around the world.

“IO is a pretty global event,â€ Pichai said. “We have viewing parties in over 597 locations, in 85 countries, on six continents. And there are over 1 million people watching this on the lifestream today.â€ After saying hello to cheering live stream parties in London and Brazil, Pichai turned his attention to a particular party in Nigeria. “Let’s go to Nigeria, where we’re thrilled to have an all-female developer group.â€

“In fact, at IO this year, we’re very excited. We have 20% female participation, which is up from 8% last year,â€ said Pichai. “And even more exciting, we’re joined by more than 1000 women in this room, so thank you.â€

But Google didn’t stop there. Completely counter to Apple’s mostly homogenous makeup of executives, Google introduced two women with integral roles at the company, and had them discuss their roles in development of both Google Chrome, as well as Google’s Play Store.

Avni Shah, director of product management for Chrome, was the first woman on stage. She went on to demo new features and interface improvements in Google Chrome, now the world’s most popular web browser.

After Shah was Ellie Powers, product manager for Google Play. She talked about the inclusion of new testing tools for developers, and making it easier for developers to implement new payment methods for their apps.

While only two women spoke at the keynote, it was two more than Apple’s Worldwide Developers Conference (WWDC) only a few weeks prior. And both the acknowledgement of the lack of women developers in the computer science community as well as the increase in women developers at the conference were improvements over Apple’s neglect of the situation.