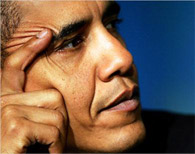 President Obama appeared on 60 Minutes Sunday night in his first interview since he announced the killing of Osama bin Laden. The news raised the program to No. 1 in the ratings on Sunday night as 13.8 million people tuned in to the broadcast, according to Nielsen’s estimates.
The President gave details about the courageous helicopter raid that took place in Pakistan. “It was the longest 40 minutes of my life, with the possible exception of when Sasha [Obama] got meningitis when she was 3 months old and I was waiting for the doctor to tell me she was alright. It was a very tense situation,” said Obama.
Watch as Obama talks with 60 Minutes’ Steve Kroft:
Visit CBSNews.com to see the rest of the interview.
OWN CEO Christina Norman Let Go
After the four-month-old channel continued to garner less than expected ratings month over month, Oprah Winfrey and her business partner, Discovery Communications announced the dismissal of the channel’s chief executive, Christina Norman, Friday.
Norman will be temporarily replaced by Peter Liguori, the chief operating officer for Discovery Communications, and is expected to fulfill the role until at least the end of this year.
“Joining OWN was a great opportunity, and launching it successfully and drawing more than 67 million viewers is one of my proudest achievements,” said Norman, in a press statement. “My thanks to Oprah and David [Zaslav] for entrusting me with this brand and giving me the opportunity to launch OWN. As I move on to my next challenge, I am confident the strong foundation we have built will position the network to achieve great things.”
There’s a lot of speculation as to who might take over Norman’s former position permanently. A day before the announcement, Judy McGrath left MTV Networks, fueling speculation that she might be heading over to OWN, but Liguori called the timing “pure coincidence,â€ according to the New York Times.
After a consistent decline in the nation’s overall unemployment rate, the Labor Department reports it’s increased to 9% for the month of April. The Associated Press attributes the rise to more people getting back out to look for work.
Employers added 244,000 jobs in April, marking an increase in jobs for the third straight month, and the biggest increase in the past five years.
The advertising trade magazine Advertising Age ranks the multicultural advertising agency GlobalHue the premier African American agency and No. 2 agency for Hispanics in 2010, according to it’s agency report.
“We are honored to have achieved this position of industry leadership and wish to extend our thanks to our clients and staff for making it possible,” says Donald A. Coleman, founder and CEO of GlobalHue, in a press statement. “With large African-American and Hispanic segments, GlobalHue is the largest U.S. multicultural agency overall.”