by  Anslem Samuel
January 26, 2011
ACE OF SPADES: With Cristal officially in his doghouse, Jay-Z decided to unofficially, and lyrically, endorse upstart champagne brand Armand de Brignac aka Ace of Spades in 2006. Not only was the bubbly blatantly endorsed in rhymeâ€”â€œH.O.V.A., gold bottles of that Ace of Spade/Why even fool with these other guys, they all stingy,â€ Jay-Z raps on â€œShow Me What You Gotâ€ from Kingdome Come (2006)â€”but the easily recognizable bottle was prominently displayed in the songâ€™s video. In 2009 Armand de Brignac, which launched only three years prior with a staff of 20, revealed that its production run of 60,000 bottles was nearly sold out. Many credit Jay-Zâ€™s co-sign of the bubbly for turning the boutique company into a major player. 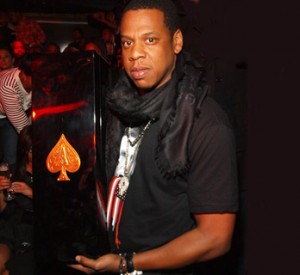