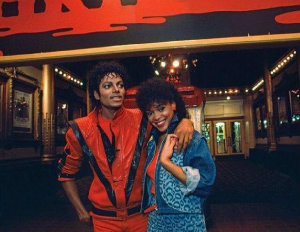 Ola Ray, Michael Jackson’s gorgeous girlfriend in the unforgettable “Thrillerâ€ video, filed suit against MJ’s estate and his production company in May of 2009 for a breach of contract, reports TMZ. Ray filed her claim with the courts just one month before the King of Pop passed away, stating she was still owed a large sum of money from accumulated “Thrillerâ€ royalties.

Michael Jackson’s estate and the production company settled with Ray earlier last year, but the payout amount has now been said to be $55,000 in addition to $20,000 in lawyers’ fees. And Ola’s not the only one going after the estate for owed royalty payments. John Landis, who directed the legendary “Thrillerâ€ video, “filed a similar lawsuit,â€ says TMZ, but his settlement was a bit larger than Ola Ray’s. Landis filed against the MJ estate for more than $2 million, and while his final payment is not confirmed, the music video director has also finally reached a settlement with the estate and production company.

In the meantime, if you need to reminisce on the classic MJ visual, take a look below.