MJ's Converses Worn in the 1984 Olympics Placed on Acution Block 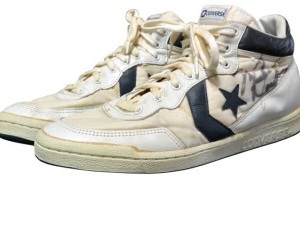 According to NBC Sports, the sneakers NBA legend, Michael Jordan, wore at the 1984 Olympics will go up for auction. This was before Jordan played for the NBA, Pre-Nike days, of course. The sneakers were worn during his first stint in the Olympics before the famed ‘Dream Team’ that he led 8 years later at the 1992 Games.

Grey Flannel Auctions is handling the auction of the 1984 Converse signed by Michael Jordan. Grey Flannel’s Michael Russek stated the auction house verified the shoes by confirming that the consignor was a ball boy and pictures of him in the locker room in Los Angeles when he was given the sneakers.

The Converse 1984 shoes will go on the auction block in October. Grey Flannel Auctions was in charge of the sale of Jordan’s “flu gameâ€ shoes last year, which netting $104,765.