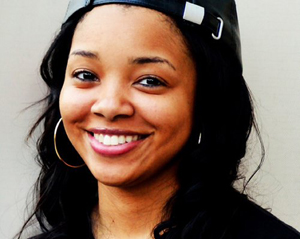 What was the most challenging part of your journey?

The biggest mistake I made was taking the time to look at what other people were doing. I would get discouraged. They had 100,000 downloads and secured $500,000 in funding. People who hadn’t achieved half of what I did were getting funding and I wasn’t. I decided to learn the proper way to pitch and step up my game.

Just when I was about to give up and get a nine-to-five I got an email from a girl in Ohio. She said she was in middle school and had used my app. She was amazed because her favorite app was created by a girl. It came at the perfect time because I was thinking of quitting. It showed me I was on the right path. I thought that was stupid dope.

For years no one knew who you were, why did you decide to stop flying under the radar?

In the past I couldn’t care less if no one knew who I was. I realized someone needed to step up for the younger generation and show people that technology is cool. I’m willing to be that person. Now, I’m getting ready to keynote for Black Girls Code in New York.

What was it like being a part of the documentary “She Started It?â€

I had cameras in my face all of the time, which I’m not used to. They filmed some in New Orleans for New Orleans Entrepreneur’s Week, and a little more with the Tech808 conference in Oakland. I had an opportunity to go back to Mississippi and visit my high school. Going to that school was a step in the right direction, because it was about tech and that is not what Mississippi is about. If I can take the things I’ve done and make a difference in Mississippi it will be huge.

Is there a tech startup presence in Mississippi?

I’m trying to be the one to start it. I am finishing up a proposal to do an innovation hub in Jackson, MS. I left Jackson because there were no mobile app companies there to provide mentorships or internships. I’m sure other people have left the state for the same reasons.

What do you think is the answer to the lack of diversity problem in the digital workforce?

I tell people the lack of diversity falls back to the lack of knowledge and nobody points that out. The average 9th grader knows music and sports. But if you ask them about the difference between and PHP and ASP they’ll look at you like ‘What are you talking about?’ It’s hard to blame somebody for what they don’t know.