Harlem residents gathered for a rally to support one of their own. The assembly was held in response to a brutal attack on a woman outside of a Harlem liquor store last week.

CBS reported that the demonstration took place in front of the Adam Clayton Powell, Jr. state office building on Saturday. Roughly 100 people showed up to denounce the heinous assault on the 31-year-old unidentified woman.

“This is the liquor store where the young lady was assaulted. Harlem not with the bullsh**t,” one resident tweeting video of the event wrote, adding the hashtag #ProtectBlackWomen.

According to CBS News, a trio of thugs attacked the woman after rebuffing advances from one of the male suspects. The 31-year-old mom had gone to the store located on West 128th Street and St. Nicholas Avenue to buy a bottle of wine last Monday around 6 pm. One of the men (seen in a red coat in video footage) offered to purchase the beverage for her, but she declined.

“I politely declined,” the woman explained, “and I said ‘No thank you, but thank you. I can pay for it myself,’” she told CBS News.

The suspect took the woman’s “no thank you,” as an insult. She detailed further that “basically said that he felt like I thought I was better than them.”

The victim gathered her things and left the store. That’s where things took a turn for the worse. The group of men followed her out of the store while becoming more aggressive.

“I just asked him, I said, ‘You’re seriously trying to fight me? I’m trying to go about my business,’” she recalled in response to her attacker’s menacing behavior.

The group of men chased the mom down, and surveillance captured the gang maliciously kicking and beating her. One of the suspects viciously mauled her in the face, injuring her eye– which no longer opens.

“To bite me, and do that,” the woman told the news outlet. “Maul me the way that he did – with me screaming and saying ‘I’m just trying to get my daughter.’ That – that’s an animal. That’s not a person.”

After the gang beat the woman, they stole her phone after it fell out of her hands.

CBS News also reported that after the assault, a person at the scene urged the woman to flee. The suspect allegedly had attacked another woman in the past.

Witnesses called the police, and she was taken to a local hospital in Harlem.

A search is still underway for the goons involved in the attack. 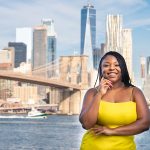 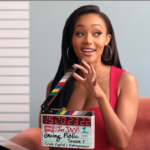