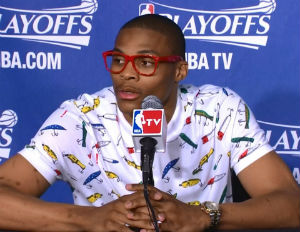 In an interview with GQ last year, Westbrook detailed how he found himself so comfortable designing clothes – “I think going from fashion week, to meeting Anna Wintour and AndrÃ© Leon Talley, to going to Paris and getting the whole experience, I was able to pick people’s brains and see how they started. That made my transition easier, getting into a fashion mindset. Obviously I play basketball, but I also have a fashion mind–not just wearing the clothes, but knowing about the textures, materials, and colors. Even the difference between fall, spring and summer, the whole nine. And everyone just kept telling me: “Be yourself.” Be as natural as possible. That’s one of the best things I heard, and kind of something I always believed in, anyway.â€