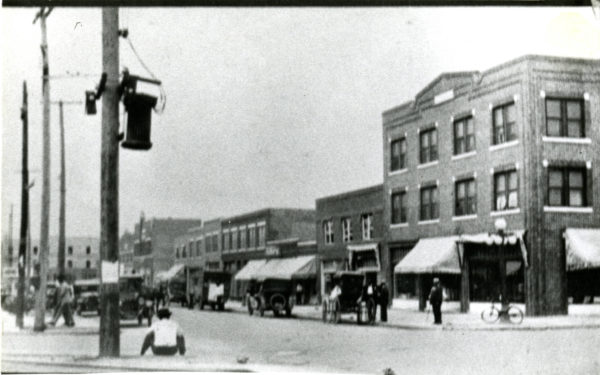 Black Wall Street - Before The Race Riot of 1921

“I had been in school for two years and I knew about life, liberty, and the pursuit of happiness, and I thought it pertained to me until that day,” says Dr. Olivia Hooker as she recalled May 31, 1921, the day a white mob obliterated 42 square blocks in Tulsa, Oklahoma, formerly known as Greenwood — or as W.E.B Dubois dubbed it, “Black Wall Street.”

At the age of six, Hooker recalls being terribly affected by losing everything, particularly, her favorite doll and doll clothes. “It took a long time for me to really get to the point where I could sleep well.”

It took a lot longer for her family to recover financially.

While their home was not burned to the ground like most others, her father and grandfather, Hank and Samuel Hooker, owners of one of the most prominent clothing stores in Greenwood, lost more than $100,000 in goods. The men in her family were placed in an internment camp and when they were finally allowed to return home, they found that whatever valuables that weren’t stolen had been destroyed.

Greenwood was plundered when a white mob, angry about the alleged molestation of a white girl by a black boy, descended upon the town’s black inhabitants overnight. When the sun rose on June 1, 1921, more than 300 black residents were dead or missing, and almost the entire community was burned to the ground. The 10,000 residents in the community were scattered across the country.

Hooker’s family moved to Topeka, Kansas, and the former professor, now 94, who remembers finding artillery shells in the dresser drawers, says she refused to attend school because she didn’t want anyone teaching her that didn’t look like her. “It was like having everything removed as if we had gone to another planet,” she says.

Decades later, Hooker, now a resident of Greenberg, New York, and two other survivors, Otis Clark, 105, of Seattle, Washington, and Wess Young, 92, of Tulsa, attended the screening of Before They Die!, a documentary detailing the accounts of several survivors and Harvard Law professor Charles Ogletree, who unsuccessfully petitioned the courts of Oklahoma and later the Supreme Court for reparations. Ogletree assembled a team of prominent attorneys that included Johnny Cochran and Adjoin A. Aiyetoro, a longtime activist and legal counsel for the National Coalition of Blacks for Reparations in America.

After learning about Ogletree’s quest, his friend, Reginald Turner, the movie’s director and producer, felt compelled to document the survivors’ testimony.

“My law career has been put on hold, and I haven’t really worked because  I’ve been obsessed and committed to this process. But it has been a complete labor of love,” says Turner before the screening of Before They Die, which cost about $930,000 to make.

With the help of the Executive Leadership Council (ELC), a membership organization that represents the most senior African American corporate executives in Fortune 500 companies, Turner was able to raise $1 million and take the survivors around the country to tell their stories at screenings.

Within 72 hours after deciding to help put on a screening of the movie in New York, Westina Matthews Shatteen, a member of the ELC and managing director at Merrill Lynch, convinced American Express, JPMorgan Chase, the Bank of New York Mellon, the New York Stock Exchange, Deloitte & Touche, and Merrill Lynch to underwrite the screening at the Times Center earlier this week. The ELC is planning to finance several more screenings.

Turner also received help from his cousin, Denise Clement, who produced the film and interviewed 22 survivors from across the country, including Oklahoma, Kansas, Illinois, New York, California, and Virginia. When the project started in 2003, there were 125 survivors were still living. Now there are about 65, she says.

“Our efforts with the film are to do what the government has not done, and that is to find a way to get reparations for them before they die,” Clement says. “The people in Rosewood, Florida, [an African American town where a massacre occurred in 1923], Japanese Americans who were in interned during World War II, victims of the Oklahoma City bombing, and families and victims of Sept.11 have all been compensated. The only people who have not been compensated were the survivors of Tulsa 1921.

“Greenwood had been extremely prosperous, and because of segregation, the community was totally self-contained. The community had black-owned doctors’ and lawyers’ offices, movie theaters, hotels, two hospitals, and several schools. “Once the dollar came into the community, it stayed in the community multiple times before going back out,” Clement says. “Blacks were allowed to work in white Tulsa, but they were not allowed to live in white Tulsa. So they brought all of their salaries back to the community and that is where it stayed.”

The riot started when a gun went off after several black veterans of World War I tried to protect the 19-year-old boy accused of molestation. An angry crowd of more than 1,000 white Tulsans clamored for the sheriff to release the boy so that they could lynch him. After the shot went off, the sheriff deputized the crowd, which then began shooting black people and looting houses.

“In order to cover up the fact that they were looting, they started burning houses. But they were burning houses knowing that there were people in the houses,” says Clement, who described photographs of charred bodies lying in the streets. “There are panoramic photos that show block after block of destruction. Houses were burned to the ground and the only thing left standing is the chimney. The photographs look like a war zone. Nobody denies that the event takes place, but for about 70 years nobody really talked about it.”

To make matters worse, after the riots, black Tulsans filed more than 100 lawsuits in 1921, but the opinion of a grand jury ruled that the victims caused the riot so whatever destruction occurred was their fault. As a result, insurance claims were all denied, and the victims were told they brought it upon themselves.

John Rogers, CEO of Ariel Capital Management, was a significant financial contributor to the film and appeared in the movie. His great-grandfather owned the Stratford Hotel, which was destroyed after the riots in Greenwood. “I can imagine he was never quite the same,” says Rogers. “[I think] he lost some of his confidence and his entrepreneurial spirit.”

Today, Hooker says she thinks it is important for people to know that in the United States, these kinds of things can happen. “The people who were supposed to protect [us] did not,” Hooker says.

Otis Clark, who was 18 at the time, hopes that the film will “help us realize that we can do better now than we did then. That hope has yet to be fulfilled.

In 1999, the Tulsa Race Riot Commission looked at tens of thousands of documents related to the riot to verify stories and gather information that had not been revealed since 1921. In 2001, they issued findings that the survivors should get reparations and that there should be a memorial and a scholarship set up for the descendants for the survivors.

So far, in addition to not receiving any reparations, the survivors have not received an apology from the State of Oklahoma or any U.S. president. The movie has helped raise $100,000 at a screening in Oklahoma, and garner an apology from the current Tulsa mayor, Kathy Taylor, but the U.S. Supreme Court refused to review the case in 2005.

“The movie is necessary for the rest of the world to see what the great American flag stand for,” says 92-year-old Wess Young, who was 4 years old when the riot took place. “It does not protect all.”