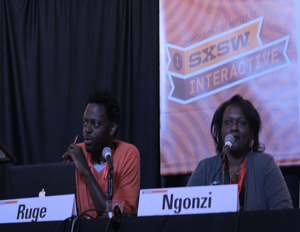 Many people’s view of Africa is outdated, and, quite frankly, inaccurate. The Western world continues to be shown images of poor, uneducated women in villages with no access to the modern world.

Where are the progressive images of young women using social media to share their stories, or women heading technology companies in places like Nigeria and Kenya? These questions were asked at Monday’s panel “Africa, Tech & Women: The New Faces of Developmentâ€ at this year’s South by Southwest Interactive Festival. Led by Project Diaspora co-founder TMS Ruge, the hour-long discussion shed a different light on the role of women on the continent. The panel featured such notable figures as Vice President of InMobi Africa Isis Nyong’o and Ebele Okobi of Yahoo!.

There has long been emerging markets in Africa; however, there are still many misconceptions about technology on the continent. Over 30% of Africans are defined as middle class, and mobile phone penetration has risen to 60%, according to statistics shared during the presentation. Over 1 million affordable Android phones such as IDEOS have been sold, opening up multiple possibilities with the mobile web and apps. Applications such as Cnectd and StoryDroid are being developed in Africa to allow users to share their stories. Women are adapting to these platforms in record numbers. There is a noticeable change in consumer behavior, as users are becoming producers of information, rather than just consumers.

Internews Vice President Debora Ensor notes that technology has begun to infiltrate villages. Women are staying in school because they want to learn how to use technology. Science and math are no longer considered a “man’s thing,â€ and young girls are increasingly interested in these fields. Women are also leading some of Africa’s largest technology companies like Main One Cable CEO Funke Opeke.

Even with this progress, Western companies still have a misguided view of Africa. Okobi, who runs Yahoo!’s development strategy states, “charity is not a business strategy,â€ and challenges companies to ask themselves, “Do you want clients, or recipients?â€ Recent missteps by companies such as Nike in understanding the role of African consumers, as well as charity organizations such as Red and Invisible Children highlight the disconnect between these organizations and African consumers.

As Ensor states, non-governmental organizations (or NGOs) need to listen to consumers and support–not dictate–how they should live their lives. Africans are building tools and platforms without the help of charities and NGOs. She gave the example of a group of women from a small village that created a radio program that shares tips, recipes and political discussions after a NGO-funded station failed to catch on.

The panel agrees that there is a lot of work to be done to increase tech penetration in Africa. However, as mobile tools become more accessible to the masses, Africans are increasingly sharing their stories with the world, giving women a new and powerful platform to inform the masses.