The Search for Americaâ€™s Next Black Comedians 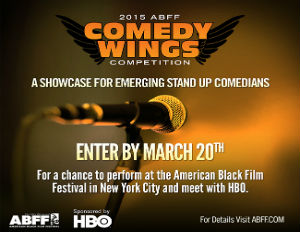 Black Enterprise and Film Life, Inc. join forces to bring the 19th annual American Black Film Festival (ABFF) search for new comedic talent through this year’s return of the Comedy Wings Competition. Sponsored by HBO, the national search helps find undiscovered men and women with a natural born ability to make rooms laugh. Â “What’s so cool about it is they extend the invitation to apply to anyone. There [are] no restrictions like, ‘You need this many TV credits. Or had to have performed in this venue or do it in this amount of time,â€ says last year’s winner Amberia Allen. Â “Why not try everything that’s available to you that don’t have some kind of obstacle that’s imposed for you? If you can do it, the worst that can happen is they don’t choose you. And that’s going to happen plenty of times in this business.â€

Comedians are asked to submit 3-4 minutes of comedic material. Judged on 50% performance and 50% creative material, ten semi-finalists will be picked to perform an 8-10 minute set in front of a panel of judges in New York at this year’s ABFF. The top four will showcase their funny skills at HBO’s ABFF Comedy Wings finals event on Friday, June 12, 2015. “I was the first one to win the competition. So I think more than anything, it provides confidence and exposure,â€ says Zainab Johnson of her 2013 win. “It’s not a competitive sport, but when you do decide [to compete], and you win, you feel accomplished and validated. It boosted my confidence, clearly in my standup career. It was nice exposure to a specific demographic. ”

Along with gaining valuable exposure, thanks to ABFF’s Comedy Wings Competition, Allen and Johnson are part of the “Hey Ladies Comedy Tourâ€ set to kick off at Black Enterprise’s Women of Power Summit this March. “I looked into it and saw Zainab did it. And of course ABFF is a huge festival, so I was like, ‘This would be a great opportunity to not only showcase my standup and make those connections with some of the people in film,â€ says Hadiyah Robinson, a 2014 finalist who is also on the “Hey Ladies Comedy Tour.â€ “I also write and I felt this would be a great way to network with others and expand myself. That was very much the motivation for entering it. Robert Townsend was there. Â I mean, who doesn’t want to do comedy in front of Omari Hardwick?â€

The deadline to enter the ABFF Comedy Wings Competition is March 20. For more information go to ABFF.com.

Be sure to check out the video below.