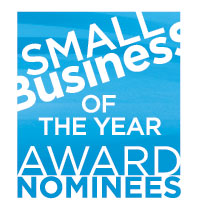 SMALL BUSINESS OF THE YEAR NOMINEES
This award is presented to the small business owner whose efforts or entrepreneurial pursuits exemplify the passion and commitment needed to overcome adversity as well as attain success. Founded in 2001, ALL(n)1 offers security personnel and technology, traffic control, and law enforcement services primarily in Georgia, Mississippi, and Alabama. The company employs full-time and part-time security officers as well as technicians with experience in low voltage cable/wiring and installation of burglar alarm systems. Among the firms clients include Hartsfield-Jackson Atlanta International Airport and only a few months into 2011, Parker inked a five-year-deal with the city of Atlanta. ALL(n)1 was also selected by Coca-Cola to provide security for its 125th year celebration where the soft drink company welcomed 8,000 guests to Atlanta. The 250 staff firm closed out last year with $8.5 million in revenue. Coalescence custom blends spices, seasoning and nutritional premixes for national fast food chains such as Wendy’s, and companies offering prepackaged foods. Blount, 41, who serves as the company’s senior vice president and chief operating officer and his wife (company president), 39-year-old Cauley, founded Coalescence in 2005. Though high start up costs were the main entry to barrier into the industry, with the help of an angel investor and a lot of perseverance, Coalescence has inked deals with Kellogg’s, PepsiCo, Tyson and Wendy’s among others. Blount and Cauley expect revenue to reach $28 million in 2011 as the money hit its own record high in 2010 generating $24.5 million. Running a brick-and-mortar as well as operating an e-Commerce site, Monif Clarke, 32, tapped into an often ignored but highly visible demographic: full-figured women. Launched in 2005, the New York-based entrepreneur’s wide selection of apparel for plus-sized fashionitas generated $585,000 in 2010. The company opened a small boutique inside of its showroom in 2007. Clark also sells to independently owned shops in Atlanta, New Orleans, Milwaukee and even Australia, Bermuda and Jamaica. Optimizing its digital presence, Clark formed strategic partnerships with online retailers such as Overstock.com and Ideeli, both of which carry the line. These deals accounted for 42% in sales in 2010; the company anticipates year-end revenues of $1 million.

Join us in celebrating our 2011 Small Business Award nominees at Black Enterprise’s annual Entrepreneurs Conference, taking place May 22-25, 2011 in Atlanta, Georgia. Visit blackenterprise.com/ec for more details. As an incentive BE is offering you a discount on early registration: Just enter code BEDG295 and receive $200 off. Don’t miss this opportunity to receive valuable strategies and resources to help take your business to the next level.

Pay Your Bills…With a Gift Card