In Memoriam: Comic Book Pioneer and Champion of Diversity Dwayne McDuffie - Page 2 of 2 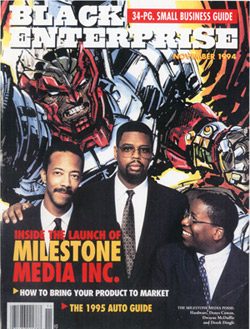 Let me share a bit of Dwayne’s history and why he was so exceptional and versatile. Â He was born and raised in Detroit, Michigan. I always said that he was a genius simply because he fit the bill. Â He attended Michigan’s The Roeper School for gifted children and later the University of Michigan studying physics, graduating with an undergraduate degree in English and a graduate degree in physics. He also attended film school at New York University’s Tisch School of the Arts.Â  Dwayne also wrote for stand-up comedian and late-night television comedy programs, including handling scribe duties for David Letterman.

After a stint as a copy editor for a financial magazine, he entered the comic book industry by gaining a position as an assistant editor for Marvel Comics, where he conceived and launched the company’s first line of superhero trading cards. His first major work was the development of Damage Control, about a company that cleaned up after the battles of superheroes and super villains. Always advocating the creation of more African Americans on the pages and behind the scenes of comics, he submitted a parody comic proposal, Teenage Negro Ninja Thrasher, in response to Marvel’s treatment of Black characters.Â  As a freelancer, he wrote for such titles as Captain Marvel, The Avengers, The Amazing Spider-Man, Deathlok and a special that featured the pop star Prince. Dwayne was the type of writer who always would seek to advance the reader’s knowledge by dropping in lines from a Zora Neale Hurston novel or using W.E.B. DuBois’ The Souls of Black Folk and Booker T. Washington‘s Â Up From Slavery as giveaways to readers.

While Dwayne was at Milestone, he oversaw the production of more than 300 issues between 1993-1998, years in which the titles were published, and is responsible for the revival of Milestone through the Static Shock animated series and reprints and new series from DC Comics. He developed new fans through television, writing Static Shock, Teen Titans, What’s New Scooby-Doo?,Â  Justice League and cartoon Network’s Ben 10 franchise.

I was fortunate that I got a chance to see and talk with Dwayne and his dear wife, Charlotte, last week. I attended the premiere of All-Star Superman, the Warner Bros. animated feature that he served as screenwriter and was released on Feb. 22. As usual, it was another example of Dwayne’s brilliance in adapting the Superman mythology with depth, dignity, humor and humanity. The last time I talked with him was the night I returned from my three-hour session with the group from Jack & Jill. I was compelled to tell him how excited those kids and parents were about his role in creating characters that they could identify with. I shared the 400-plus page bible he created of heroes, villains and a multicultural world unlike anything seen in comic books 20 years ago and since. I told him there was a hunger for what he had to offer young children of color, as well as older generations. His last words to me were: “Maybe we should make some more characters that they can connect with.â€

It warms my heart that comic fan sites and mainstream publications have noted the significance of Dwayne’s work and life. I am glad I got a chance to share with him what he meant to the world and that he was able to give me another glimpse into his creative vision. He provided generations with rich experiences, the chance to dream of heroes and possibilities. I–and multitudes of fans–will deeply miss him. He was our hero who shared endless possibilities.