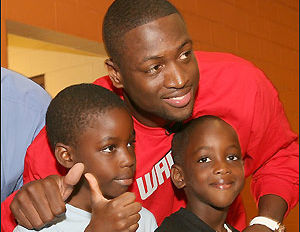 Basketball star Dwyane Wade‘s ex-wife has publicly gone on record about losing custody of her two sons and accused the Miami Heat shooting guard of harshly disciplining their oldest son.

In an interview, Siovaughn Wade said when their son Zaire, 10, was younger, Wade would show the same signs of abuse that he experienced with his father as a child. Siovaughn said she was “concerned” and said those concerns were ignored in court when she was denied custody. The former Mrs. Wade also detailed the hardships of finding out that she would not be able to see her sons for two months.

“I promised them I would see them on Sunday; I learned from that not to make children promises,” she said.

“When my lawyer called, I knew it was bad news but I begged him to tell me. I remember taking a moment to pause. I could break down at that moment or I could say, ‘God help me.’â€