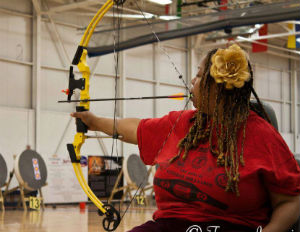 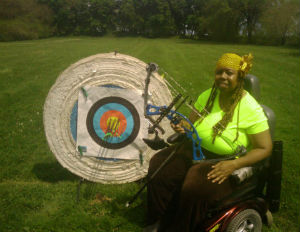 What, or who, is your primary motivator?

My primary motivator would be my covenant with God, because I asked Him, ‘What can I do to make a difference?’ I’m a national gold medalist archer; my highest score is 299 over 300. I shoot from my wheelchair with my mouth — it gives new meaning to shooting your mouth off. I once lived in a nursing home. I was headed to a hospice and I was pulled out of there by the military and the VA and friends, and taken to a facility, where they said I had to do everything, I just had to do it.

I found something that I could do and it changed my life. I decided I didn’t have to live in a nursing home. I could live somewhere where people could come to help me. I did not have to go to a hospice. I still had hopes and dreams. Don’t give up on life–just remember there’s always somebody that can help. Think about utilizing sports, even if you have never done it before. It doesn’t have to be archery. I scuba dive, I horseback ride, I golf, I play tennis, I sail, I kayak, I do fencing–there are so many things I never did even when I was able-bodied, and now there are people helping me do it. Once you see what you can do as an athlete, it opens your mind to say, ‘Hey, I do have the ability, but I have to do things differently.’

I think I can help people out there. I feel that archery is the one thing that God has in line for me, but I know He wants me to get out there and share my story to encourage other people; especially veterans, and anybody that’s disabled, and women too.

Are you currently aiming for the 2016 Olympic Games?

No, not yet. I’m not there yet. Right now I’m in contention for it, which means that I’m still trying to get ranked in the world so that I can get appointed to the team to go.

Have you faced any difficulties as an African American woman in archery?

Of course–you can look at the team and see. Let me just say it this way: archery, when you get to the Olympic level, there are very few of us. A lot of people in the African American community don’t even know how to get in the Olympics. That’s one of the things that I want to do. I want to team up with the people that do an Olympics awareness expo to identify different types of Olympics, and of course archery is the main sell, so that people can get a taste. I think there are a lot of people within the African American community that would do so well in a lot of the sports, but they don’t even know they exist. They may see it on TV, but they don’t know how they can access it. Â Also, with the African American community–African American women in particular–there are not many athletes. Archery was one of the first Olympic sports that women participated in. However, African American women, I haven’t seen many. I can’t say the reason why, but I know you have to be able to raise a large amount of resources. It’s not a cheap venture.