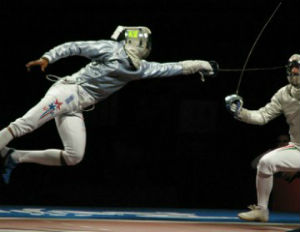 Nzingha Prescod
Nzingha Prescod is a senior at Columbia University. In 2011 she was deemed Ivy League Rookie of the Year and was also named a two-time, First-Team All-Ivy winner in 2011 and 2013. Prescod is currently ranked No. 2 in the U.S. and No. 12 in the world. She placed sixth in the 2012 Olympic games with Team USA. In 2015 Prescod placed fifth at the Pan American Championships as an individual and brought home the gold with the team. In 2013 Prescod became the first woman foilist to win the Marseille Grand Prix.