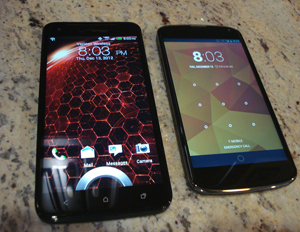 Under the DNA’s all-in-one housing, you’ll find a powerful quad-core 1.5 GHz Qualcomm Snapdragon S4 Pro processor. Adding fuel to the fire, 2GB of RAM surely helps speed up any download or upload. Web browsing was quick, even though under Verizon’s 4G LTE network; we had a few of those lagging load times.

The Nexus 4 is also equipped with theÂ same quad-core processor. Even though it doesn’t run on an official 4G LTE network, browsing the web and watching high-quality videos is fast, but may end up draining your battery. When it came to Google’s Chrome browser app, loading a webpage packed with serious graphics and live visuals wasn’t a problem. The Nexus has its lagging moments, but you give it the benefit of the doubt because it’s on the HSPA+ network, which is not quite 4G, but way faster than a 3G connection.

To be frank, we were a bit weary of the Droid’s daily battery life expectancy. Smartphones of this caliber like an HTC flagship usually totes a better battery performer (2,100 mAh battery and higher). However, to our surprise, the technology used to power the high-demand screen doesn’t drain it that much. You’ll be able to get at least 4 to 5 hours of multitasking done before you see that dreadful redline warning you to connect your charger.

The Nexus 4’s large battery (2100 mAh) doesn’t last too long either. After talking on the phone for close to two hours and then watching a few YouTube videos, the battery drained about 60%. We advise walking with your charger if you expect to be out all day.

The Droid DNA’s camera is excellent. It’s an 8-megapixel digital point-and-shoot. It has a multi-shot, One-Press continuous shooting feature that enables you to seamlessly snap 4 pictures in one second, and up to 99 pictures in a row.

Just like the DNA, the Nexus 4’s has the same megapixel camera, which has the ability to take pics with zero shutter lag. Besides that, it has the awesome 360Â° panorama view picture option, allowing you to capture your entire surroundings.

The DNA comes with built-in Beats Audio. The audio playback from the Droid DNA is vivid and packs a bass-filled punch. It’s just about as loud as the Nexus 4, but sounds better. What we did notice is that when blasting music at its loudest through the phone’s speaker, the back of the phone (near the top) released an annoying vibrating sound.

Since the Nexus 4 is Google’s flagship smartphone, everything is set to the company’s standards. It doesn’t have any additional third- party software, or Beats by Dre audio enhancements, but it’s loved by Google’s most loyal fans for that very reason. The native Google Play App doesn’t give you the “umph” you’d like when listening to music like the DNA does. There’s a speaker in the back that doesn’t pump out enough sound at times, but the front speaker makes up with excellent call quality.

The LG Nexus 4 takes the win. Despite the Droid DNA’s enticing and vivid large 5-inch screen, which may be overkill for some, there are lots of reasons why this phone will fit your lifestyle. Â The Nexus 4’s performance, camera and battery life are top notch for smartphones of its class. Lastly, not having to deal with any additional third-party software like the Droid’s HTC Sense 4+, will give you the creative and productive freedom for anything on the go.