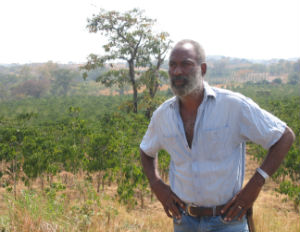 I thought it was historically accurate and powerfully and dramatically presented. Brother Chadwick who played Jackie Robinson did a fantastic job. Harrison Ford was excellent as Branch Rickey.

Did your father ever talk about those days playing with the Dodgers?

My only experience with baseball was going to the old-timers games with him. Every year, the retired baseball players get together and they have 2 or 3 days of games. That was a time when we got to see some of the camaraderie with the old players. But my father didn’t dwell on his past much. He talked more about the contemporary issues in his life.

Stamford, Connecticut was a white area wasn’t it?

Our house was surrounded by woods and lakes on three sides so we had a bit of isolation. It’s something my parents wanted. I integrated the primary school in the area and we had our issues the first year, but after that we worked it out.

Did he ever talk about his time in the Army?

He didn’t speak about it much but he was court-marshaled for refusing to go to the back of the bus on a military bus in an army base.

Your mother is still alive!

Yes. She’s 91, remarkable. It’s so beautiful. My older brother Jackie Jr. died when he was 24 and my sister and I are the only living siblings.

What have you been doing since you’ve been in the States for the release of the film ’42’?

We had a showing of the film with the Jackie Robinson Foundation in New York. It’s been a great time to talk about the film and hopefully, people will be empowered by the film and see that the past generation was challenged and succeeded and we benefit from the fruits of their labor and the challenge still exists. We have an obligation to our children and our grandchildren to continue to expose the struggle so that they have a future.

What do you think about blacks’ economic situation at present, in light of the black presidency?

We’re extremely proud and pleased to have Obama as president. I think it’s a great role model for African Americans. But he’s one individual. And neither a single African American president, nor an American government can alone solve African Americans’ problems. I think we have to create our own economic development. Create our own jobs – because other people are coming to America. So our unemployment numbers are very high, and even when we’re working we have a lot of working poor within the African American community. And psychologically, we have things to deal with in terms of our position in America and coming to terms with the fact that we’re going to have to solve our own problems.

It’s like the game musical chairs. There are only so many seats at the table and the immigrant will work for lower wages and the immigrant has great job satisfaction because he can send $200 back to South America or Africa and feed a family of 4. So even with a low paying job living 4 or 5 or 6 to an apartment, there is a degree of satisfaction because he’s not only eating, he’s supporting his family back home.

The African American doesn’t have that level of satisfaction with the low paying jobs. And also, employers are looking for cheaper labor and labor that will be happy with those lower wages so the employer is hiring the immigrant over the African-American for a number of reasons. That is just an economic reality. That is the capitalist system of seeking the cheapest labor. There’s no complaint about that. Everyone has the right to have their own economic systems, but everyone also has the obligation to find their seat at the table in the game of musical chairs. Without it, you will get put out of the game.

Do you think African-Americans are close to being put out of the game?

I think our unemployment numbers are ranging between 20 and 24 percent average. And I bet it goes to 30 or 40 percent when you add under-employment or the working poor. And the assault on our position is getting worse – and in the future – will continue to happen. So yes, I think we are in a crisis.

We had a much larger African-American economy during segregation. So we are going to have to look toward ourselves as the future goes on. And we’ve also got to have a mind set and a skill set to compete for the jobs being offered by firms that are not African-American and show the potential employer why the African American would be a better employee than the South American, Latin American, African or the Asian.