Morris Chestnut Talks 'Rosewood' and the Key to Longevity in Hollywood 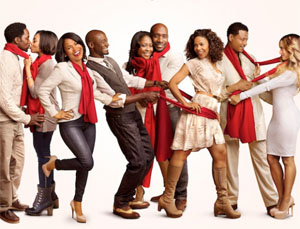 Chestnut and the cast of “The Best Man Holiday”

“Sometimes different studios will have different networks, like you might have a show on Fox that is produced by ABC studios because it’s based on deals by producers,” adds the actor.

However, regardless of the studio and network behind today’s major television shows, it’s clear that Hollywood is slowly catching on to the value of diversity. When asked if the success of shows like Empire, Scandal, and How to Get Away WithÂ  Murder will lead to more black actors and actresses exploring the possibilities of television, Chestnut makes it clear that he believes all actors are looking at the opportunities that rest in TV.

“I think that is completely across the board. Not just black actors, but actors of every level. They are looking for TV because TV is producing great material right now.”

With 20 plus years of experience in the industry and a host of successful projects under his belt, Chestnut advises any young actor who wants longevity in the industry to realize that success does not happen over night.

“People come up to me all the time and say they want to be famous, but you really have to focus on the craft and study,” says Chestnut. “There are people coming in who are so focus[ed] on the end of the journey, and they don’t want to go on the journey itself. They want it here and now and in two minutes, and it doesn’t work that way. For some people, they may catch a break where they wait on tables today and land a starring role tomorrow. But it usually doesn’t work that way. That’s not the norm.”

Be sure to catch Chestnut’s new show Rosewood every Wednesday night at 8 p.m. EST on Fox beginning Sept. 23.