Voting Rights Act Decision: 'Why We Must Fight For Our Right To Vote' 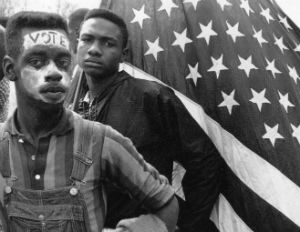 In two months, we will officially commemorate the 50th Anniversary of the March on Washington. It was a historic moment in which more than 250,000 citizens — predominantly African American — flooded our nation’s capital to call for jobs and freedom while paving the way for nation-changing civil and voting rights legislation. The Supreme Court, however, has decided to recognize this milestone by delivering a devastating blow to five decades of progress. Through one judicial act, the high court effectively compromised the promise and protection of the vote for every citizen.

With the 5-4 decision in Shelby v. Holder, the court struck down on Tuesday a key provision of the Voting Rights Act of 1965 (VRA). The majority ruling stripped the law’s formula that Congress has repeatedly reauthorized to determine all or jurisdictions of states – many of them located in the South – that would be required to gain federal approval before changing election laws. Hours after the Supremes’ decision, Mississippi and Texas announced plans to move forward with controversial voter ID laws — and expect more to follow. Eleven states in the past two years have approved laws that would mandate voters to show identification at voting booths. But the 48-year-old law required some with a history of voter discrimination to get “pre-cleared” by the federal government before making any adjustments to voting laws.

The ruling, which Congressional conservatives will attempt to use to overturn the entire law, comes during a week in which the high court punted a seminal case on race-based college admissions — Fisher v. University of Texas at Austin — back for review by the United States Court of Appeals for the Fifth Circuit for “strict scrutinyâ€ and, in turn, will spark future challenges of similar diversity policies. Earlier this week, it also issued two decisions that will make it tougher for workers to prove they’ve suffered from employment discrimination.

In Shelby, which challenges the 2006 re-authorization of Sections 4 and 5 of VRA, Chief Justice John Roberts, a long-time critic of the law, wrote: “Voting discrimination still exists; no one doubts that…The question is whether the Act’s extraordinary measures, including its disparate treatment of the States, continue to satisfy constitutional requirements.â€

Viewing the VRA formula in Section 4 as an outdated relic of the 1960s and punitive to the South for past sins, he further concluded: “While any racial discrimination in voting is too much, Congress must ensure that the legislation it passes to remedy that problem speaks to current conditions.â€ Although his opinion wasn’t as vitriolic as Justice Antonin Scalia’s “racial entitlement’ declaration or Justice Clarence Thomas’ comparison of affirmative action to Jim Crow, it had the same damning effect.

Justice Ruth Bader Ginsburg countered, pointing to a study used by Congress during the 2006 re-authorization and authored by Michigan Law School’s Voting Rights Initiative that revealed minority voters continue to face distinct obstacles to political participation in places subject to Section 5 and will be more likely to find intentional discrimination, extreme racial polarization in voting, and a lack of success by minority candidates. She wrote: “Throwing out preclearance when it has worked and is continuing to work to stop discriminatory changes is like throwing away your umbrella in a rainstorm because you are not getting wet.â€

The point is that such discrimination is still very much alive and active in America — and will continued to be so without a voting rights law with teeth.

Attorney General Eric Holder cited a federal court’s use of the law last year in blocking the Texas congressional redistricting map on the grounds that it discriminated against Latino voters. In that case, the court noted that the parties “provided more evidence of discriminatory intent than we have space, or need, to address here.â€ And another federal court that reviewed South Carolina’s photo ID law also noted the “vital functionâ€ it played in encouraging state officials to modify implementation of the process in future races so it would no longer disproportionately impact African American voters. In a statement, he asserted: “Without the Section 4 coverage formula, neither of these discriminatory voting changes would have been subject to review and both could have been implemented immediately.â€

Moreover, the Lawyers’ Committee for Civil Rights Under Law finds the ruling will “shift the cost, delay and other burdens involved in blocking discriminatory election practices onto minority citizens.â€

President Obama said he was “deeply disappointed with the Supreme Court’s decision…invalidating one of its core provisions upsets decades of well-established practices that help make sure voting is fair, especially in places where voting discrimination has been historically prevalent.” He charged Congress with coming up with a new formula. But he must take deliberate action as well through the introduction of legislation and use of the bully pulpit as a strong voice for strengthening a law in which he has been a direct beneficiary. It can serve as his LBJ moment, rallying the nation, working with the civil rights community and demonstrating the same persuasive force — in some cases, arm-twisting — as Johnson did to gain enactment of the Civil Rights Act in 1964 and VRA in 1965.

As expected the Congressional Black Caucus members were distressed by the decision. Many vividly remember the day when VRA became the law of the land, putting an end to almost 90 years of Jim Crow laws like the poll tax and literacy tests that barred full participation of African Americans from the electoral process. The response from Rep. John Lewis, the Georgia Democrat who continually put his life on the line as a freedom rider and civil rights leader of the 1960s: “They’re saying, in effect, that history cannot repeat itself but I say come and walk in my shoes.” The CBC, dubbed “the Conscience ofÂ  Congress,” must take a lead role in fighting to block updated Jim Crow legislation.

We all have a role to play and now is the time to make full use of our economic and political power. We must tap the braintrust of civil rights attorneys across the nation, support civil rights organizations and embolden our legislators on all levels. Assist our civil rights apparatus in identifying cases of voting disenfranchisement to litigate. Review voting statutes on the books as well as those brought before state legislatures, scrutinize ballots and practices at polling places and make financial contributions to such organizations and efforts.

I agree with NAACP President and CEO Benjamin Jealous that “we must be prepared to put the heat” on our elected officials in order to force Congress to act to protect our voting rights. That effort will require voicing our concerns by phone, e-mail and Twitter. It will also mean a willingness to fund candidates who seek to defeat VRA opponents, engaging in registration drives and going to the polls in droves on Election Day, especially during the 2014 mid-terms. And it calls for involvement in shoe-leather protests.

We must memorialize the March on Washington and participants of the Civil Rights Movement with more than just ceremony and lofty rhetoric. We can truly honor those who in many cases made the ultimate sacrifice to open doors for future generations through unwavering defense of our rights today. And we must use every means at our disposal to reverse the Supreme Court’s pernicious decision as well as put a halt to other baneful legislation.

Remember the powerful lesson from that momentous August day in 1963: We have the power to change the course of history. All we have to do is use it.

Boss from Hell? Learn How to ‘Manage Up’

FacebookTwitterYoutube
← Kevin Hart and Others to Star in Chris Rockâ€™s ‘Finally Famous’ ← Boss from Hell? Learn How to ‘Manage Up’
×