Your Next Best Hire May Have Spent Time In Prison

We are about to get deep into presidential politics. Despite the bipartisan efforts, how do you keep criminal justice reform from becoming a political football?

I think that if you look at what’s going on right now, this is a big issue – particularly for Republican candidates. I think Rand Paul is better on these issues than anybody. I think that if you look at who’s driving it in the Senate, it’s a lot of conservatives. I think as far as presidential candidates, Ted Cruz is good on these issues. On the Democratic side, I know Hillary Clinton came out with this statement about the need to reform our criminal justice system, which was great.

These are reforms that have happened in dozens of the states, particularly a number run by Republican governors and legislatures. We’re mostly focused on nonviolent, first-time offenders, youthful offenders, low-level drug offenders, and correcting some of the inequities like the Fair Sentencing Act — the crack versus powder [cocaine] disparity. We’re not really talking about the type of thing like the Willie Horton issues from the late ’80s when all the race-baiting was going on, unfortunately. 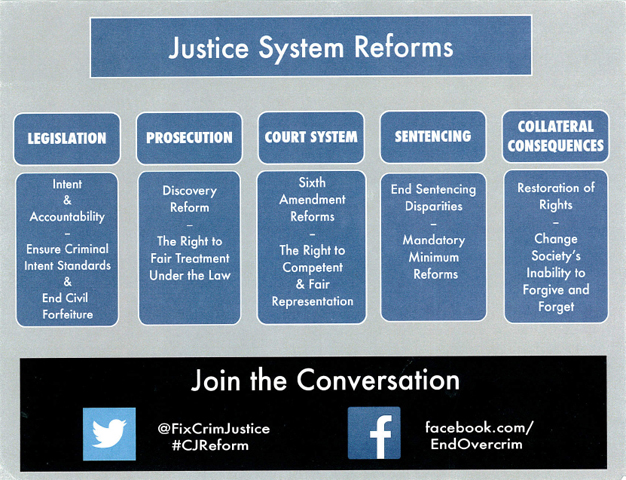 But many politicians still use fear and agitation as a means of gaining support.

I think we’re talking about being smart on crime. I think the mood of the country is different. I think when you see Koch involved and you see the ACLU, Center for American Progress [and] President Obama giving us a ‘shout out,’ we’re giving him a ‘shout out.’ We’re working together.

Police misconduct and abuse can also feed the prison pipeline. In fact, a group of African American business leaders recently gave the NAACP Legal Defense Fund $1 million to explore this issue. Along with criminal justice reform, what are your views on policing reform?

Police are responding to the incentives, what they’ve been told to do. I don’t mean harm people of color or anything like that, but more with street crimes they’re supposed to go after. My hope is if we reform the system, it will help law enforcement, too, and let them do their real jobs. And that will improve the relationships with the communities. So [with] the laws, we’re really going after criminals and violent criminals, property criminals – not dealing with personal drug usage or other things. I think, hopefully, that will help the situation as well.