Today, Nov. 4, marks the moment that politicos and Americans have been waiting for: Election Day.

As candidates attempt to make their last second pitches for votes, we as a nation are set to take on the polls. With issues including the battle between the Tea Party, GOP, andÂ  Democrats, along with high unemployment, healthcare issues and the fight for control of the U.S. Senate, citizens have a chance to participate in choosing leaders who will ultimately be leading the charge for legislation and future change.

Everyone’s votes directly impact the country. With that said, BlackEnterprise.com put together 10 Election Day GIFs that promote the importance of voting and the dire mistake in not exercising the right. 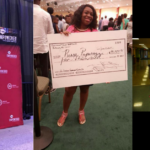 4 Tips on Pitching Your Business in Public