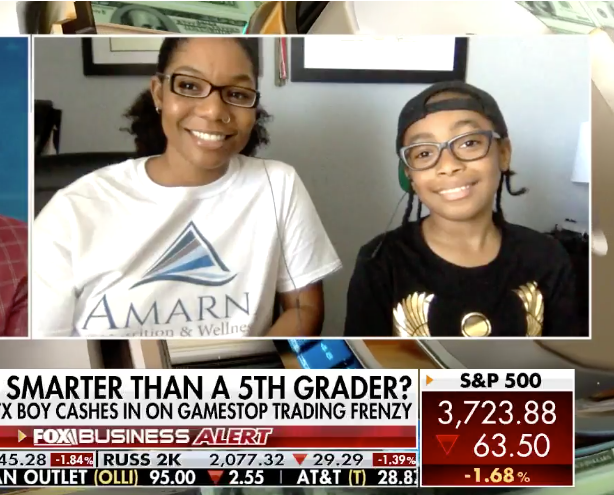 The fifth-grader who just cashed in on shares of GameStop has gone viral.

In 2019, Jaydyn Carr received 10 shares of GameStop stock as a Kwanzaa gift from his mom. This month, shares of the video game retailer increased over 1500%, allowing the 10-year old to enjoy over $3,000 in profits.

“I am going to save $2,200 of it and the rest…I’m going to invest in more companies,” Jaylen told Inside Edition.

Cashing in on GameStop Shares

The popular Reddit forum, WallStreetBets, created a stock market frenzy that left many investors with millions within minutes.

In an epic war against Wall Street, many Reddit traders started buying up shares of struggling companies. The traders targeted stocks that Wall Street investors had placed big bets against.

This buying strategy led by a community of traders caused GameStock’s price to soar exponentially. The stock price went from approximately $18 per share at the beginning of the year to a 52-week high of $483 on Thursday.

Jaydyn and his mom, Nina Carr, couldn’t believe what they were witnessing.

“My phone was going off because I have GameStop on my watch list,” Jaydyn’s Mom told The San Antonio Express-News as she watched the stock’s meteoric rise. “I was trying to explain to him that this was unusual, I asked him ‘Do you want to stay or sell?'”

Jaydyn didn’t have to think twice about his decision to sell. He was ready to capitalize on his investments in the stock market.

A Gift That Keeps on Giving

Jaydyn is proof that stocks are the perfect gift for kids. Not only do kids have a chance to learn about the stock market, but they also gain access to one of the most popular wealth-building tools in history.

Jaydyn Carr became a shareholder of GameStop stock on December 30, 2019. His mom purchased 10 shares for $6 each. Less than two years later, the $60 investment has turned into over $3,000 in profits for the fifth-grader who resides in San Antonio.

That’s exactly how successful investors like John W. Rogers Jr. got started on their path to financial wellbeing. At the age of 12, Rogers received stocks instead of toys for Christmas and his birthday. Now, at age 62, he manages billions in assets as the chairman of Ariel Investments.

Nina Carr understands the importance of teaching kids about investing early in life. “Any time I learn something, I show him as well,” Nina shared with The San Antonio Express-News “I wanted to pass on the knowledge I have now because I learned it late in life. I want to give him a step up.”