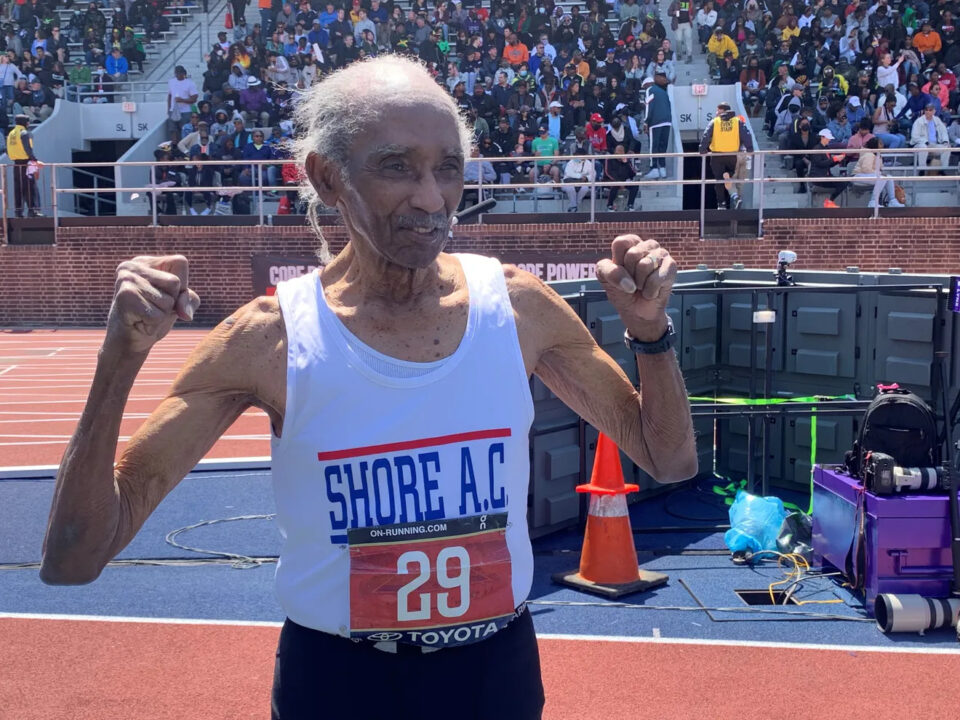 A day after celebrating his 100th birthday, Lester Wright broke the record for his age group in the men’s 100-meter at the Penn Relays in Philadelphia on Saturday.

“It was pretty nice to be able to do this at age 100,” Wright told the Asbury Park Press. “When I came here, I was a little bit nervous, but when I saw the crowd and everything, I fell right in with it.”

On Saturday, the New Jersey native and sprinter brought thousands to their feet as he achieved an incredible run. According to FOX 29 News, this race is the first in three years for the WWII veteran since recovering from an illness. But he held his own against his 80-something competitors at the Franklin field.

Competing for Shore Athletic Club, Wright crossed the line in seventh place at 26.34, which surpassed the previously set record by Donald Pellmann in 2015 at 26.99 seconds.

Born in 1922, Wright ran track for Long Branch High School in the 1930s and then married his teenage sweetheart, Adele. Later he enlisted in the Army and traveled to Europe during World War II, where he evaded bombs at the Battle of the Bulge, also called the Battle of the Ardennes. During his service, Wright impressively earned four Bronze Battle Stars.

Following the war, Wright came home and attended college on the GI bill. He then opened the first African American-owned dental lab in Monmouth County, New Jersey, making prosthetic teeth, according to the Asbury Park Press.

All the while, Wright’s passion for running continued to flourish. In 1999, as a 77-year-old, he conquered the 75-and-over 100-meter dash at the Penn Relays.

As for his record-breaking feat, Wright believes that anyone can accomplish what he has done. He says it all starts with self-belief.

“At 100 meters, I feel like I’m just getting started,” Wright said. “I thought this was nice, but I wanted a longer race.”