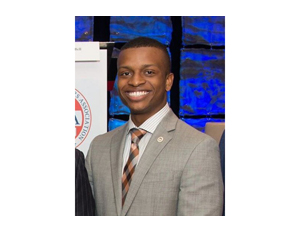 To select this year’s Truman Scholars, the Harry S. Truman Scholarship Foundation reviewed 768 files from 315 institutions of higher learning. One hundred ninety-nine students from 136 schools were selected to be interviewed. In the end, the Finalist Selection Committee chose 62 students, all of them nominated by their school, to make up the 2017 cohort of Truman Scholars, of whom at least eight are black.

The organization selects young people who are committed to leadership in public service and supports their graduate education and professional development.

Dontae BellÂ is a junior at Howard University in Washington, D.C., studying economics and military science. He is a member of the Air Force Reserve Officer Training Corps and was selected as a pilot candidate this spring. After graduation, Dontae will commission as a second lieutenant in the United States Air Force. Eventually he hopes to earn a master of public administration degree before pursuing a career in public service.

Taylor CofieldÂ is a junior political science and international studies major with a minor in Middle East studies at the University of Missouri. She is also studying Arabic. Cofield is a member of the university’s track team and is currently a legislative intern with the Missouri State Senate. Upon graduation, she hopes to fulfill a two-year assignment in the Peace Corps and then pursue a dual master’s and law degree program in contemporary Arab studies and national security law.

Lexis IversÂ is a third-year student at American University in Washington, D.C., where she studies law and policy. She is the founder and director of Junior Youth Action DC, a mentorship program focused on the academic and personal development of foster youth. She plans to pursue a career in child welfare law, which will allow her to advocate in behalf of children when foster care systems fail.

A native of Decatur, Georgia,Â Chelsea JacksonÂ is pursuing degrees in political science and African American studies at Emory University in Atlanta. She is a co-founder of Atlanta Black Students United, an activist network for students committed to racial justice in the metropolitan area. She plans to attend law school and then practice civil and human rights law.

Thomas MitchellÂ is a political science and education policy double major at Rhodes College in Memphis, Tennessee. His academic interests focus on the experiences of minority students in schools and representation of minorities in the teaching profession. He was recently elected president of the Student Government Association at Rhodes College.

Read more about the 2017 cohort of Truman Scholars at JBHE.