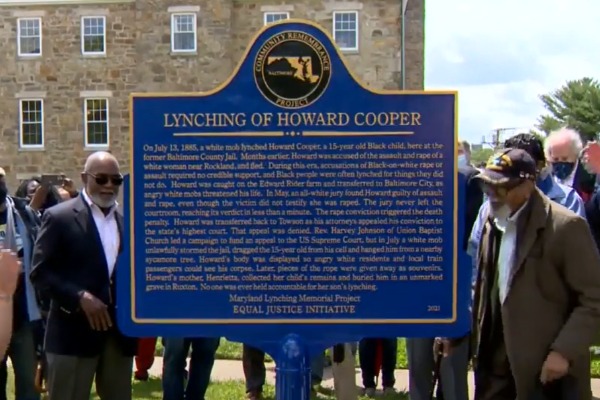 The souls of 34 Black men and boys who were lynched between 1854 and 1933 were given some form of peace over the weekend after Maryland’s governor granted them posthumous pardons.

Maryland Gov. Larry Hogan made the announcement on Saturday while unveiling a new historic marker that memorializes Howard Cooper, a 15-year-old who was dragged from a jailhouse and hanged by a lynch mob in 1885, NPR reports.

The pardons came after students from Loch Raven Technical Academy and the Maryland Lynching Memorial Project launched a petition earlier this year urging the governor to pardon Cooper. The petition led the governor to look into every documented racist killing within the state.

Hogan shared hopes that the pardons would “in some way help to right these horrific wrongs.” The Republican governor, who’s running for president in 2024, stood alongside Baltimore County Executive John Olszewski and Maryland House Speaker Adrienne Jones as the new memorial was unveiled in Towson, Maryland, the same location where the jail Cooper was snatched from once stood.

The Maryland Lynching Memorial Project identified at least 40 people who had been lynched in the state, with not all of them having criminal charges that could be pardoned. Among those pardoned include King Johnson, a man who was snatched by eight men who beat and fatally shot him after he was left unguarded in jail in December 1911. Another pardon went to a 13-year-old boy identified only as Frederick who was hanged from a tree in September 1861.

With Maryland’s latest move, they become the first and only state to grant pardons to lynching victims within their state, WABE reports.

Cooper’s historical plaque unveiled on Saturday recalls the events after the 15-year-old’s murder.

“Howard’s mother, Henrietta, collected her child’s remains and buried him in an unmarked grave in Ruxton,” it reads. “No one was ever held accountable for her son’s lynching.”