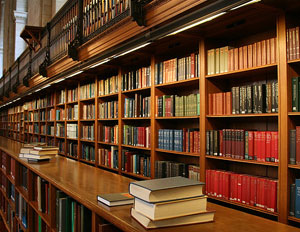 Soon you won’t need to head to the library just to use the computers. You’ll be able to grab one of the institution’s Wi-Fi hotspots and get online at home.

That’s what the New York Public Library’s Library Hotspot Program is doing, and it just received a donation from Google to supply even more low-income New Yorkers with essential web access at home.

Google’s million-dollar pledge will pay for 10,000 data connections (through Sprint) and supply 500 Chromebook laptops, according to WNYC.

“Whether you’re a parent looking for a job, a child working on a school project, or a family looking for information on services, broadband access is no longer a luxury — it’s a necessity.â€ said Mayor Bill de Blasio. “I commend both New York City Libraries and Google for their commitment to increasing accessibility to technology through the innovative Library Hotspot program, and I am thrilled to see thousands of New York City families get access to the internet.â€

The $500,000 grant from the Knight Foundation kicked off the project in June of 2014, and sought to give “quality access to people whose current access to the Internet is limited to 40-minute, once-a-day time slots, available on a first-come, first-serve basis in one of the library’s 92 branches.”

The initial rollout only targeted 100 families, but the influx from Google’s pledge will drastically increase that number to 10,000. A small portion of the hotspots will be donated to similar pilot programs in Maine and Kansas public libraries.

The New York Public Library will allow eligible patrons (people enrolled in one of BPL’s adult education or inclusion programs, including ESOL, Adult Basic Education, or Citizenship Preparation classes) the opportunity to borrow devices for six months if they lack broadband internet at home. The Brooklyn Public Library will lend hotspots for one year.