4 Tax Law Changes That Will Affect Your Small Business 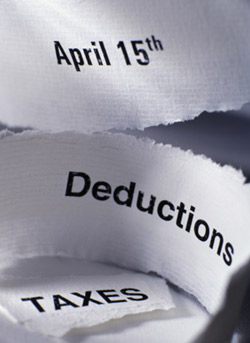 Get what you deserve this tax season (Image: Thinkstock)

As tax time draws near, it’s imperative that entrepreneurs be aware of the impact of the Tax Relief, Unemployment Insurance Reauthorization, and Job Creation Act of 2010, which was signed into law by President Barack Obama in December. Richard Levychin, CPA, Managing Partner of KBL, LLP, a New York City-based Certified Public Accounting and business advisory services firm, says small business owners should be aware of the following provisions:

Under prior law, a 50% bonus depreciation deduction was allowed for qualifying property. The provision has been extended to include property placed in service before Jan. 1, 2011. Additionally, certain property with long production periods and transportation property, including certain aircraft, qualify if placed in service before January 1, 2012. Bonus depreciation also applies to certain qualified leasehold improvements. The property must not be predominantly used outside the U.S. in order to qualify. The deduction is allowed in full for alternative minimum tax purposes. So if a taxpayer purchases and uses computers (five year property) in 2010 for $2,000,000, the 2010 depreciation deduction would be $400,000 without bonus depreciation. With the bonus, the 2010 deduction would increase to $1,200,000, or 60% of the cost of the property. Over half of the tax relief in the Tax Relief, Unemployment Insurance Reauthorization and Job Creation Act of 2010 comes from this single provision.

This section of the IRS code allows a business to deduct the cost of certain property instead of capitalizing and depreciating it. Under prior law, the amount of annual expense was limited to $250,000 and was reduced dollar for dollar for the amount of Code Section 179 property placed in service in excess of $800,000. The allowed expense amount and the investment limitation of $250,000 and $800,000, respectively, were scheduled to revert to prior levels of $25,000 and $200,000 in 2011. The Act, however, increases the allowed expense amount and the investment limitation to $500,000 and $2,000,000, respectively, for years beginning in 2010 and 2011. It also expands to include qualified leasehold improvements, qualified restaurant property, and qualified retail improvements. The expense election is calculated prior to, and in addition to, bonus depreciation. For example, the combined 2010 expense deduction, bonus deduction, and regular depreciation deduction amounts to 80% ($800,000) for a $1,000,000 eligible five-year asset placed in service in 2010.

For 2011 only, Social Security taxes are cutting by two percentage points the employee’s portion of the 6.2% tax to 4.2% up to $106,000. Â This benefit also applies to the self-employed as well–reducing the Old-Age, Survivors, and Disability Insurance (OASDI) tax rate under the Self-Employment Contributions Act (SECA) tax by two percentage points to 10.4% for 2011 up to $106,000 plus the additional 2.9% Medicare tax (the 2010 retained rate) on their total self-employment income.