4 Ways We Can Improve Teacher Training 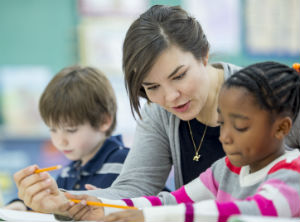 Why aren’t American elementary school teachers specialists in the subjects they teach, instead of generalists? Why aren’t they taught the difficulties that students are most likely to encounter?

In this insightful post from the Hechinger Report, some of the differences between the approach to public education in the United States and in high-achieving countries are explained.

Why don’t American students reallyÂ getÂ math? Because their elementary school teachers don’t either, says Marc Tucker, president of the National Center on Education and the Economy, a policy institute that studies what America can learn from the world’s best-performing education systems.

“We are mainly recruiting teacher candidates from the bottom half of the kids who go to college,â€ said Tucker. “These kids come out of high school with a very shaky command of high school math and eventually become teachers who can show their students the steps for doing a long division problem, but can’t tell them why it works. So when their students get to high school, they can’t really do algebra either because they don’t understand how the arithmetic works.â€

In a new report released by NCEE, researcher Ben Jensen looks at what America can learn from how teacher-training institutions in top performing countries prepare elementary school teachers for the classroom. He examined how four systems–Finland, Japan, Shanghai, and Hong Kong–arm teachers with a rich understanding of the subject areas they will teach and how their future students will learn that content. Jensen found that these countries provide four lessons for the U.S.:

“There’s a generalist approach to primary education that says subject expertise isn’t really important, that the generalÂ  level of content knowledge that most adults have is enough to prepare them to be elementary school teachers, but no high-achieving country would agree,â€ said Jensen.

But Jensen says that the case of Finland shows that schoolsÂ don’t need to recruit astrophysicists to teach primary mathematics, just educators steeped in the curriculum they’re going to be putting in front of their students.

“In your first week you are handed the elementary school curriculum and you are told that for the next few years you are going to be taught not only the content of that but a deep conceptual understanding of the skills underlying that curriculum. And here’s the most important thing: You will be taught all the questions students are likely to have, the difficulties they are likely to encounter in learning that curriculum,â€ said Jensen.

The lessons may be more critical now, as most states continue to hold students to the more rigorous standards outlined by the Common Core. As reported by the Hechinger Report last month, “depth of understanding was hailed by its architect as a cornerstone of the Common Core, a set of educational guidelines that have been adopted in 43 states and the District of Columbia for what students need to know in each grade in English and math. The problem is that most elementary school teachers did not learn math that way, and many now struggle to teach to the new standards.â€

Sharon Robinson–president of the American Association of Colleges for Teacher Education, an interest group representing the nation’s 800 schools of education–thinks the report makes some important points, particularly around selectivity.

“GPA is not the issue,â€ said Robinson. “The average GPA for candidates is over 3.0, that’s for their work in college, and that leads us to ask, what are we missing here? Is the college work not adequately rigorous or focused in a way that leads to candidates who will be able to learn to teach? We are also looking at selection at the hiring end. We are getting more folks interested in using measures that actually document candidates’ capacity to teach.â€

Robinson, however, faults the report for a “blaming and shamingâ€ tone that makes it harder to “overcome the defensiveness that is provoked by these conversations.â€

This story was written by Emmanuel Felton and produced byÂ The Hechinger Report, a nonprofit, independent news organization focused onÂ inequality and innovation in education.Â