Winging It: 5 People You Never Want to Meet While Networking 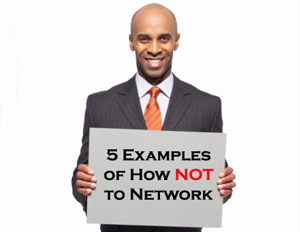 I’m a lousy networker. It’s not that I do the wrong things. It’s that I often neglect this critical part of my professional life, and I’m full of what I think are “legitimateâ€ excuses. Not enough hours in the day… Not enough days in the year… Not enough energy once I’m done with work and chauffeuring my kids and baking for the church bake sale and… Well, you get it. But I’m constantly trying to do better, because I know how critical networking is. So I study it.

I’ve interviewed, observed, and greatly admired great networkers. I’ve read their books, gone to their seminars, and drank enough of their Kool-aid to have boldly preached the gospel of good networking myself on occasion, like now. I do so with the conviction of a true believer who understands that when done well, networking can be the single most effective tool in your kit for building a business, a brand or career. That said, when done poorly, it can kill whatever chances you’re hoping to create.

So when I see people making huge networking mistakes, I cringe, as I did at the Black Enterprise Entrepreneur’s Conference (EC) in Atlanta last week. Don’t get me wrong, I met scores of fantastic and inspiring people there and countless great connections were made at that event–relationships that will bear fruit in the form of business partnerships, new concepts and products, and profitable deals that will yield Black Enterprise headlines for years to come. Look for them! But in the meantime, beware of the major mistakes that too often set people back as they strive to get ahead.

The attendance at this year’s EC broke all previous records–a great sign of the vitality and drive of our nation’s Black small business owners. But, among those large numbers of attendees, there were a few serious gaffes on display and I feel compelled to out some here, in hopes that those who made them will read this, recognize themselves, and adopt a better approach next time.

Why do I feel justified, given that I’ve admitted my own challenges on this front? It’s sort of like that old saying that those who know do, and those who don’t teach. So indulge me, and know that I offer these real-life examples of what NOT to do, with love. 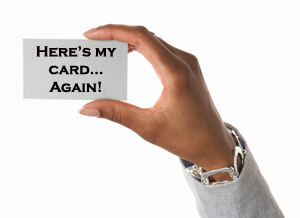 Seated at lunch, waiting for the program to begin, I noticed a woman sprinting from table to table, giving out cards. I thought she was snagging the chance to distribute marketing materials for her business to as many people as she could–a brilliant move if it had been the case. Or, maybe she was handing out invitations or exclusive coupons for her services. It was none of the above. This woman, who made her way to my table soon enough, was literally giving her business card to every person in the room, barely lingering long enough to say her own name, no less learn anyone else’s. Was she an environmentalist who ordered too many cards and didn’t want them wasted? Did she make a bet to see how many cards she could give out in record time? Was she multi-tasking by getting her name out while doing a sort of workout? I couldn’t imagine. When she walked away from us, my table mates and I sat there, dumbfounded, each staring at her card, which had an ironic motto printed in bold at the bottom: “Connecting with a Purpose.â€ Really?

Certain people–say, Oprah, Bill Gates, President Obama–have easy access to enough well known people that they probably can’t help dropping big names pretty regularly. And yet, they are probably still careful not to, because it’s obnoxious. And, unless you happen to be Oprah, Bill Gates, or President Obama, suggesting that you personally know the world’s A-listers also tests credibility. So, even if you happen to have met, done business, and partied with Oprah, Bill Gates and President Obama, you might want to share that information sparingly, as in not all at once, not to absolutely everyone you see, and not within the first 30 seconds of saying hello.

Seriously, stalking is creepy. It doesn’t matter how nice your dress or suit is, how expensive your shoes, warm your smile, or well intentioned you may be. If we barely know each other and every time I look over my shoulder (or at my Facebook page) you are either watching (commenting), waving (poking), or waiting to be noticed (writing on my wall)…. Again–it’s weird. And a little bit scary. Spread yourself thinner. Way thinner.

We all know technology has afforded us faster, more efficient and dynamic use of our time. But if we just met, the room is full of people, and there are others waiting to be introduced to one or both of us, please do not pull out your iPad2 and proceed with your entire marketing presentation/business proposal/media kit. Happy to see you’ve got the latest gadgets and know how to use them, but it is neither the time nor the place. Furthermore, this approach makes you a major…

Several mind-numbing minutes into one insistent gentleman’s impromptu iPad presentation, another conference participant politely interrupted with a message that I was needed by a colleague in another room. Relieved, I apologized to the Showman and headed for the door. Once outside, the messenger stopped me and said, “I hope you don’t mind, but I made it up. That guy caught me before and that’s 15 minutes of my life I’ll never get back. I was just trying to help you out.â€

“Thank you,â€ I said, meaning it with all my heart.

The Hero–now that’s a huge networking DO!