7 Motivational Takeaways from 'A Conversation with Common' 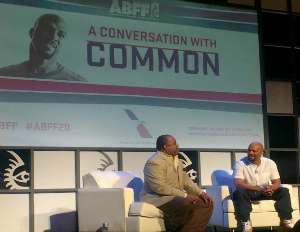 Today Common left the ABFF (American Black Film Festival) audience pumped and inspired after a lively talkback with Roland Martin of TV One.

Sponsored by American Airlines, the conversation between the two focused not only on the artist’s acting and film work, but delved into community activismÂ and what he hopes to achieve as an influential black artist. I, along with those around me, found myself nodding vehemently about the points he made about putting in the work; about picking up the torch for the advancement of black people; and about believing in love and trusting that what is meant for you, is for you. Here are a few takeaways from a conversation with Common.

1. “Never place yourself in a box.” Common started acting because he felt he was in a box. During the early 2000’s he pursued the craft because hip-hop wasn’t feeding him what he needed at the time, so he branched out. And we’re glad he did, right?Â

2. “You can never get around the work. Do the work, then make the connections.” When Common received his first call back (in four years) for Smoking Aces, he knew he had finally put in the work, instead of just saying acting was something he wanted to do. He read scripts. He rehearsed. He videotaped his audition and kept working on it.

3. “Prepare and be in the moment.” When he began acting, he knew being nervous was part of the process. It’s okay to be nervous; that usually means you’re excited about what you’re working on.Â But preparation is key. You know you’ll deliver if you’re prepared. Just let it go and be present.

4. “I have a responsibility as a black actor. The more success we have as black filmmakers weÂ open doors for other black films to come through.” Even when the film didn’t live up to the expectations of the studio, he knew he had to keep going. He understands that as black actors and filmmakersÂ in the industry, you can’t beÂ mediocre; you have to be excellent.Â If something doesn’t live up to expectations, it doesn’t mean you can’t continue. You’ll still do something that means something. In the end, you are judged by your body of work.Â

5. “God’s love and black love are the most important aspects of my life.”Â He feels to create something and for it to be received from the community and culture you come from feels good; and weÂ all agreed. “My people will give me the truth. Getting black love is like coming home and being received with open arms.”Â

6. “Gotta let God flow through you.” When Ava DuVernay approached him about a song for Selma, Â he and John Legend both embraced the word “glory” while brainstorming. John went into the studio and created a melody in one day. Common quickly laid down his verses. He knew this was what he was supposed to do; and felt that he was supposed to get his first Oscar through Glory.

Â 7. “Gotta be the WE movement. Not just I.” Filming Selma inspired Common to really live up to his dedication as an activist. He knows it’s our time to take the mantle. Building from the work of Harry Belafonte, Muhammad Ali and others, he feels that artists have to further the cause for the next generation by listening to both youth and elders. Speak it, but also live it.