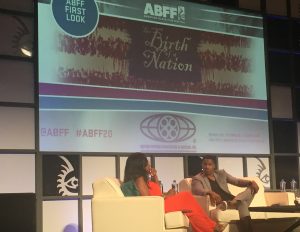 “This is the hardest thing I’ve ever done in my career. It was my desperate need to create something to show our children and change the narrative,â€ said Nate Parker, writer, director, and lead actor in the the anticipated epic ‘Birth of a Nation’. Change the narrative was the themeÂ throughout the engaging 2 hour ABFF talkback moderated by Star Jones and sponsored by the Motion Picture Association of America. The film about the infamous slave revolt led by Nat Turner was acquired by Fox Searchlight at the Sundance Film Festival for a record breaking $17 million. While Parker highlighted scenes from the powerful film, it was also his consciousÂ presence and message that captivated the audience. Here areÂ few highlights from the conversation.

1. When Jones asked if there are too many slave films being produced, Parker readily responded by saying, “I don’t think there are enough.â€ One thing he struggled with was that he only had an 1:50 minutes to tell this story about ourÂ ancestors. “We didn’t deal with breeding, and the destruction of the family. So many of those things we’re still dealing with right now. We have to be open to idea that the narrative has been highjacked and we need to take it back.â€

2. Parker wants to reclaim our history, and that was a major motivator to get the film made. Nat Turner wasn’t the only slave that revolted, and Parker feels it’s essential for us to research and educate ourselves about our missing stories. “If it’s not in a book, people think it’s a conspiracy. The first step to reclaiming our history is finding it. Nat Turner represents the [notion] that there are things we will not tolerate.Â I’m less concerned with how white people see us but how we are conditioned to see ourselves.â€

3. Parker understands it’sÂ essential to provide the proper context to bridge the Nat Turner story with the current racial, sociopolitical landscape. “The oppressor hasÂ diverted us from our narratives to strengthen stories that don’t elevate us as a people. Something systemic has happened that we’re not looking at.â€ With his work, including Birth of a Nation, Parker hopes to a bridge gap with the times.Â “If this film wins awards, people don’t see it and behaviors don’t change, we have lost.â€

4. “Faith got me through this film.â€ Parker’s faith was and still is integral to his focus and tenacity to make the film; a process that’s been years in the making. With tears in his eyes, Parker says, “I know you brought me here for this, Lord. I’ve poured my own money into the film. When you have so many people telling you it’s impossible, including the people who love you?â€ He looks up. “I look up to God.â€Â I do believe there’s a time and place for justified black rage. Led me this because he was trying to be Christ Like. THE BOOK liberated him.

5. “Nat’s strength came from the women in his life.â€ Parker emphasized the key role black women played in the film, particularly his mother and grandmother. It’s how he came to Christ. “There’s a reason why grandma is head of household now. At one point, we were emasculated as black men so often that women became head. We cannot negate the fact that black women have been critical component for us as a people.

Birth of a Nation comes to theaters this October.