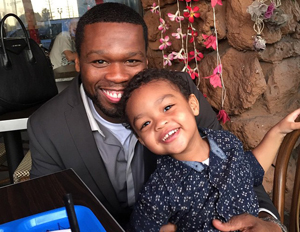 At just 2-years-old, rapper 50 Cent’s son Sire already has a modeling career, cashing in checks for more than double most full-time salaries. 50 and the G-Unit family stopped by the Angie Martinez show on Power 105.1 to dish on their new EP, The Beast, plus a few other things—like the “Candy Shop” rapper’s old flame Vivica Fox.

[Related: How to Preserve Wealth Through Good Health]

While talking to Angie, Mr. Jackson also gushed over how adorable his youngest son Sire is, so adorable that he managed to pull a modeling deal with audio company Kidz Safe. “They paid him a big payment too, $700,000. He’s super cute! You gotta pay for it,” he said in the interview.

So what’s a 2-year-old to do with 700Gs? His father said that the money would go into a trust fund, off limits to little Sire until he’s 18-years-old. 50 said that despite the barely talking toddler’s big pay, he would still handle his son’s college expenses when the time came. “I was ready to say, ‘This is your college fund,’ but I gotta handle that part and let him have that.”

Kidz Safe is a collection of headphones that features safe volume technology for children’s ears so that they don’t experience hearing loss. The line is an extension of SMS Audio, the headphone brand of which 50 Cent is majority owner.

Would you still pay your kid’s college costs if he or she were making $700,000? Tell us below.