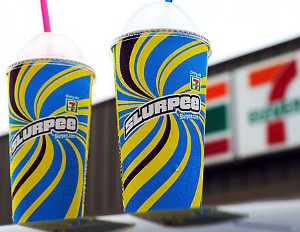 July 11 marks the day that the world’s No. 1 convenience retailer celebrates its many milestones.

7-Eleven, the world’s first convenience store, began its run in the summer of 1927 when a Southland Ice Company employee started selling bread, milk and eggs on an ice dock in a Dallas suburb.

Since that start, “convenienceâ€ has become big business. The small ice company has grown into a major international retailing chain with approximately 10,100Â 7-Eleven stores in North America and more than 50,700 stores worldwide.

To celebrate this milestone, 7-Eleven stores areÂ hosting birthday parties coast-to-coast with free Slurpee drinks for its customers.Â Offered from 11 a.m. to 7 p.m. local timeÂ at participatingÂ 7-Eleven stores in the U.S. and Canada, customers can get a freeÂ 12 ounce Slurpee, nearly double the size of last years Â 7.11-ounce size.

“7-ElevenÂ Day, July 11, occurs at the approximate midpoint of summer and the Slurpee season when summer fun is in high gear,” said Laura Gordon,Â 7-ElevenÂ vice president of marketing and brand innovation.Â “It also marks a milestone for 7-ElevenÂ when we raise a collective Slurpee toast and dance a crazy dance to celebrate our birthday and all thingsÂ 7-Eleven.”

The brand has more than just its birthday to celebrate. During 2012,Â 7-ElevenÂ stores generated total worldwide sales close to $84.8 billion. Additionally, 7-ElevenÂ has been honored by a number of companies and organizations recently. Accolades include: #2 on Forbes Magazine’s 2011 list of Top Franchises for the Money; #3 spot on Entrepreneur Magazine’s Franchise 500 list for 2012, #3 in Forbes magazine’s Top 20 Franchises to Start; #2 in Franchise Times Top 200 Franchise Companies.Â 7-ElevenÂ is No. 3 on Fast Company magazine’s 2013 list of the “World’s Top 10 Most Innovative Companies in Retailâ€ and among the Top Veteran-Friendly Companies for 2013 by U.S. Veterans Magazine.