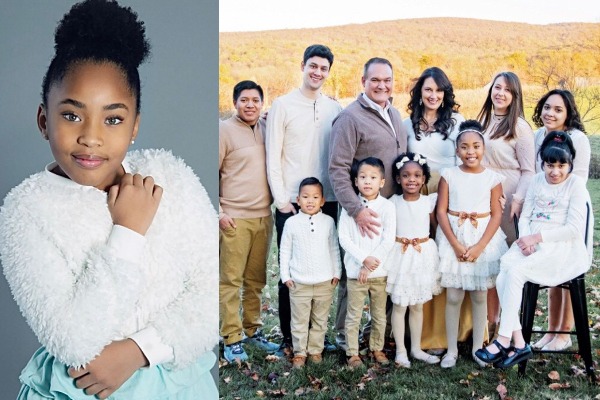 At age 9, Victory Brinker is one of the youngest opera singers to make it as a finalist on America’s Got Talent. Following her success in season 16, Brinker is releasing a Christmas album for her fans, friends, and 10 siblings.

Victory has released her debut holiday album, The Wonder of Christmas. She recently sat down alongside her mom Christine to relive their family’s extraordinary journey.

The Brinkers started expanding their family after welcoming two biological children before adopting nine more. All 11 of the Brinker kids range in age from 6 to 29.

“We’ve adopted a lot of medical-needs children,” Christine told People. “We just put the paperwork out there and said, ‘If there’s anyone that knows of a child that has a need, and we’d certainly have the heart and the home for that child.'”

Christine says the family was happy to watch Victory live out her dream on AGT.

“She’s been dreaming of being on America’s Got Talent since she was four or five,” Christine said. “She used to have us sit in the living room and pretend we were the judges.”

Growing up with six brothers and four sisters gave Victory the audience she needed to perfect her operatic singing skills.

“It’s so much fun; there’s always someone to play with,” Victory says. “We always have lots of games, even though we lose most of the pieces because we have a big family.”

Christine takes pride in adopting children with medical needs motivated to overcome obstacles despite their ailments.

“Thankfully, today, we can say all of them but one has completely overcome the medical needs that they were born with,” the mom said.

“We have three boys that were born with spina bifida, who’ve gone on to play basketball and run and jump and just be as healthy as can be, and that’s been really miraculous in itself. Not only do we get to parent these children, but to watch them just thrive.”

Victory helped put the family on the map with her history-making appearance on AGT. At just 9 years old, Victory became the first performer to receive the judge’s group golden buzzer.

“My heartbeats stomped, the waterworks started flowing, and I never thought that would happen,” Victory recalls of the moment. “It was so awesome.”

With her Christmas album, Victory brought some of her siblings along for her music video for “Silent Night.” Meanwhile, Christine loves every part of raising her rainbow tribe of children.