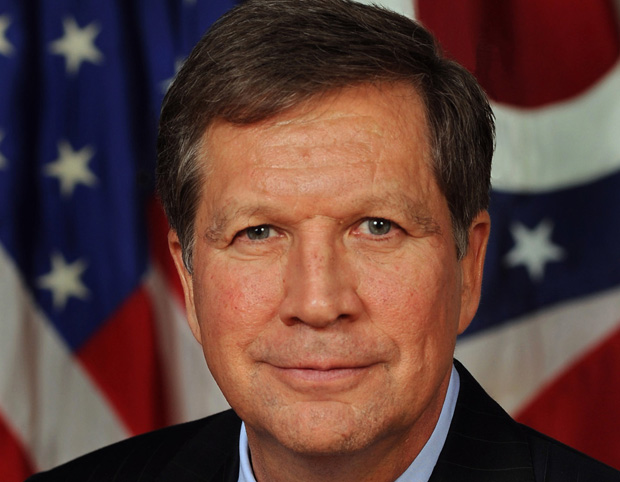 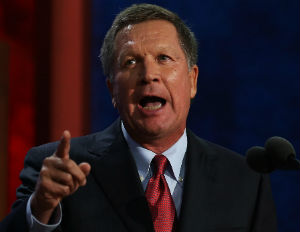 Ban the Box
While on the topic of job creation within the minority community, Gov. Kasich referencedÂ  his enactment of the “ban the box” movement in Ohio. Last year he signed a law which allows ex-criminal offenders to apply for state jobs without identifying their status as a prior offender.

“In other words, if you’ve been a non-violent felon,Â  we don’t want you to have to reveal that on day one so that you feel rejected,” Kasich explained. “We want to let you have a chance to explain who you are, and a chance to get a job in government.Â  We want you to be able to get a decent job. So we’ve provided a pathway for people to be able to get their life back.”

Healthcare
Kasich made headlines when he put himself squarely at odds with the majority of his party with his decision to accept the optional Medicaid expansion under the Affordable Care Act.

When asked what led him to agree on the healthcare expansion, Kasich suggested it was just common sense.

“I don’t believe that the mentally ill want to spend their lives in jail, or living under a bridge” Kasich said. “I think we need to give them opportunity to get up on their feet.

I believe that the drug addicted are going to need to be rehabbed and we’re putting time into that. And the working poor, I don’t want them living in an emergency room when they’re sicker and more expensive. It just makes more sense to get them some healthcare.

So the number of uninsured in Ohio has dropped. It’s been a good thing.”

The condemnation from Kasich’s Republican colleagues came swift and hard – and is probably still happening on the TV screens of New Hampshire voters on the eve of the nation’s first primary.

“[They’ve] been beating me up, but that’s part of it,” Kasich said, referring the ads put out by rival campaigns attacking his record as a conservative governor.

“And, you know, it’s so funny because Ronald Reagan himself expanded Medicaid 5 times …” Kasich continued, noting the irony of the controversy surrounding his decision.

“But look when people hear what this is all about, I think they’re supportive of it, and I’m very pleased with how we’ve been able to do this and yet be able to have a program that’s working effectively.”

Voter ID Laws
Although certainly not a champion of voting rights, Kasich is the only GOP presidential candidate who has not called for photo ID requirements at the polls. Proponents of expanded voting requirements have cited combating voter fraud as reason for their push to require photo IDs.

According to Kasich, this has not emerged as wide-spread problem in Ohio. “We’ve got to keep our elections secure, and if we start to find out that we have a problem, then we’ll have to deal with it,” Kasich said. “But we monitor this all the time.”

His resistance to implement more restrictive voter ID requirements earned him a glowing endorsement from the Boston Globe, who correctly noted that a photo ID requirement would “disproportionately affect minority and low-income voters.”

“We don’t to to be in a position where we force on them [minorities and low-income voters] the extra cost in order to vote,” Kasich elaborated. “I just don’t believe that’s what we ought to do. I think it’s important we don’t let people think that they’re being disenfranchised. ”

Islamophobia
This election cycle has been tainted by the emergence of Islamophobic rhetoric. Certain candidates have consistently played on incidents of violence and national tragedy to pander to the fears of voters, inciting anti-Muslim sentiment with each debate appearance.

While other GOP candidates scrambled to rebuke the proposed ban on Muslims, their carefully crafted talking points betrayed their hesitation to alienate voters of the far right.

Their distant criticism only served to highlight the corrosive nature of such rhetoric within the Republican party, whose last sitting president – George W. Bush – had called for tolerance in a televised statement from a mosque in the wake of the 9/11 attacks.

However, a few GOP candidates have been willing to tackle the issue head-on. Kasich is one of them.

Perhaps in one of the most admirable moments of the GOP primary to date, when asked about his fierce opposition to the anti-Muslim rhetoric employed by his some of his fellow candidates, Kasich told reporters “This may not win me the Republican primary, but there’s more to life than that.”

When asked about any backlash he faced from this statement, Kasich just laughed.

“I don’t really worry about the criticism,” Kasich said, still chuckling. “I just try to do the best I can to give people a chance. And I think after a while having that attitude becomes contagious for others.”